My son took this photo at the Powderhorn Park Art Fair 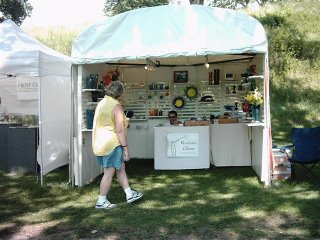 My family attended the art fair this past weekend. We had a really nice time. I've been there at least twice before in past years with my kids. This is the first year my kids didn't ride in a stroller. They're just too big for strollers. The last time they rode together in a stroller, they looked like two big goons stuffed in an old Volkswagen Beetle. They were elbowing each other and had lots of problems getting along.

This year was different. My wife and I expected them to get tired and want to go home or take breaks because they had to walk. Instead, it was my wife and I doing the complaining. My kids looked in far more tents than we did. Everywhere they looked they saw art that interested them. My son liked the photography and my daughter liked anything with color. They both liked anything that was on the lighter side like cartoon-style paintings.

My daughter loves tie-dye clothing. She stopped in one tie-dye vendor's tent and bought a t-shirt. She already has at least five tie-dye pieces of clothing, but this one was really nice, so we allowed her to buy it. While paying, she asked the people running the booth if they were hippies. I wonder if they saw my face turn red. They told us they considered themselves hippies and so I asked what it means to be a hippy. One of the them told us hippies are people who don't judge others. They just get along. The other added that they don't take plastic either.

I really like the part about being non-judgmental. We could use more of that. I thought about this for a while and wanted to add that hippies are more cooperative and less greedy than most of us. At least, that's my impression.

My friend, who is a police officer, would add that hippies tend to pass out on lawns more often than the rest of us.
Posted by rigtenzin at 9:28 AM

Your kids are the coolest!