Kayak Trailer for a Bicycle 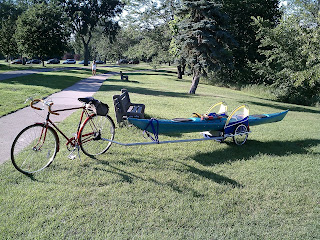 I enjoy kayaking at a lake that's about a mile from my house. I've been strapping the kayak to the roof of my van, driving to the lake, paying for parking, and unloading the kayak. When I'm done paddling, I have to reverse process and it's a bit of a hassle loading and unloading the kayak on the roof of the mini van. I don't like paying for parking and I really dislike wasting gasoline.
Here's my solution. I converted the old kids trailer into a kayak trailer. I cut the trailer's tongue in half and installed a 7-foot extension. I used PVC pipe as the extension. It was, as you might expect, a bit wobbly. So I added a steel pipe inside the PVC pipe. This corrected the problem.

It's a perfect reuse of a trailer.
Posted by rigtenzin at 4:25 PM 3 comments: 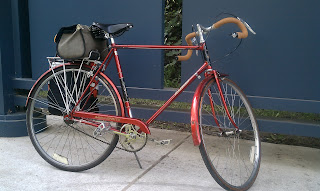 I installed the new Sturmey 3-speed, bar-end shifters on my Raleigh Sprite a couple weeks ago. I also changed to a set of randoneur-style bars and Mafac levers. The previous bars were fine, but I wanted to try something different. I previously had a pair of black, Tektro aero brake levers on this bike. They worked just fine, but they were out of place.
I've been trying to dream up an appropriately clever description of how out of place they are, but I realized the reality of putting black, aero levers on a '76 Raleigh 3-speed stands by itself with no clever comparisons necessary.
The three changes are really nice. I love riding this bike. The randoneur bars are very comfortable. I think they were the original ergonomic bars. The levers feel nice and the shifter is perfect. The shifter clicks are more positive and the movement between each click is less mushy than the original shifter.
A couple people have told me they thought the shifter would only work on the Sturmey Archer SX3 fixed hub. I found out that Sturmey has two 3-speed, bar-end shifters. I have the SLS30 which is intended for the AW hub. Just in case you wanted to know, the shifter intended for the 3-speed, fixed hub is the SLSX R3B.
Posted by rigtenzin at 4:16 PM No comments: