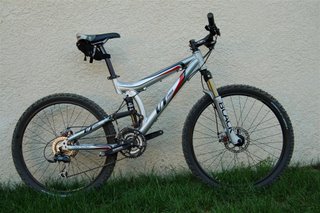 Tomorrow, I'm off to ride the trails at Levis/Trow Mound near Neillsville, WI. It's about a two and a half hour car ride from here (Minneapolis). The trails are listed as Epic Trails in the IMBA web site.

I'm taking my new mountain bike. I rode it last week a couple of times and had a noteworthy knee pain. The bike came with 175 cranks and the seat was too low. I didn't measure it and just jumped on. It felt fine and I rode. I was wrong. It was about 2cm low.

A couple of years ago, I discovered that when riding long cranks, like 175s, my knee came up higher at the top of the pedal circle than with shorter cranks and it's at that point where I felt the pain. Back then, I installed some 165mm cranks on my mountain bike and found it made a difference. 10mm? I hear you saying, "What are you some kind of princess? That's too small of a difference to notice."

But it's true. I can feel the difference. The low seat plus the long cranks combined to mess me up.

Tonight, I mounted the 165mm cranks on the new bike and a longer seatpost to accommodate the extra 10mm. The seatpost that came on the bike was at its maximum. I almost forgot, I had to install the correct bottom bracket also. That's not a big deal, because the current BB was an ISIS and the 165mm crank was an Octalink (not Octalink 2, silly).

I took it out on a after-dark test ride. Those are the best. I don't wear a helmet and I don't use a light on the test rides after installing new equipment. I love flying around the neighborhood from the light patch of one street light to another.

Those rides are nice, because they remind me of my first test rides in the dark when I was in college working at a bike shop. And those test rides remind me of riding around my neighborhood as a teenager with my buddies after dark.
Posted by rigtenzin at 9:53 PM 4 comments: 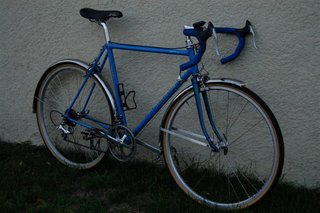 I installed fenders on my Davidson. The fenders came from a dumpstered Fuji mixte. I thought they were cheap chromed steel. After sitting in the garage for a year or so, I realized they must be stainless steel.

I had to build the front stay from aluminum stock. Not too bad.

I still need to install some better fitting bars and a better looking stem.

I want it to look like it came from this book.
Posted by rigtenzin at 8:10 PM 10 comments:

At the Minnesota State Fair recently, I took a few cell phone photos. I just sent one to myself as an email attachment. The phone includes a USB port, but I can't use it for transferring photos. It's a bit silly that Verizon has disabled USB port. I realize they want me to phone myself and incur charges. It doesn't make me like them any better than I already do.

I had a heck of a time getting this phone and lots of hassles afterward. I am not fond of Verizon. As far as I can tell that's pretty normal with cell phone service. 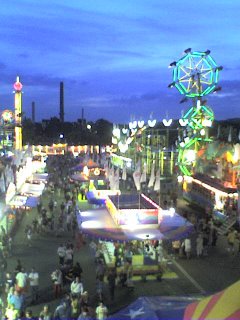 anyway, here is the photo. I think I'll buy the hacking kit that allows me to use the USB port on my phone to transfer data. I hear that it voids the warranty, but I'm not sure I care.
Posted by rigtenzin at 10:25 AM 1 comment: 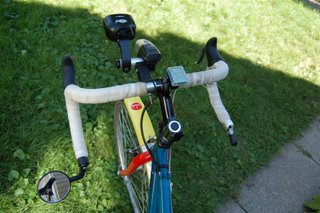 I'm in a mood to categorize bicycles. Two categories: simple and complicated.

Where does your favorite bike fit?

I don't have a favorite bike, but the one I ride every day is complicated: gears, fenders, rack, lights, bag. I keep forgetting to add the handlebar bell.

I have a couple of simple bikes, but I keep trying to make them more complicated by adding stuff.

I've had several single speed bikes, but they always lack something for me. I appreciate that many riders love singles and get along with them better than complex bikes. That's great and I admire it.

I want at least a few gears. I want some fenders. I think lights are really important in the dark. I like a rack or bag to carry things. Next thing you know, I've got a complicated bike. I guess that's just the way I am.
Posted by rigtenzin at 9:09 AM 1 comment:

I want to be the first blogger to link to this one:

A study showed a cyclist wearing a helmet is more likely to get knocked off the bike by a passing motorist than a non-helmeted cyclist.

This is very interesting. I need to digest this and gather my thoughts before I make a comment.
Posted by rigtenzin at 12:41 PM 5 comments: 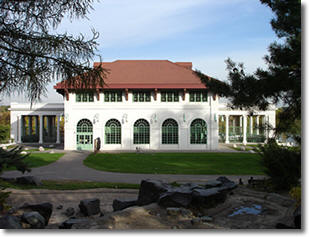 I rode the St. Paul Classic this past Sunday. I met a friend at Hiawatha Cyclery before the ride. No one else could make it.

I decided to adjust my seat height and broke the binder bolt. So I rode home, (only about 2 miles) standing up the whole time, grabbed a different bike from the garage, and rode to St. Paul.

We crossed the Ford Parkway bridge and ran straight into the ride route. We couldn't figure out why we needed to check in, so we joined the ride. We had already paid anyway.

A light mist was falling and throughout the ride increased to a light rain. We never complained. It was fun to ride without auto traffic through beautiful St. Paul. It's more hilly than my normal riding. I felt like I had a good workout even though the entire distance was only about 42 miles.

I had one of the best cookies at the last rest stop located in the Como Lake Pavilion. It was a large chocolate chip and raspberry cookie.

I saw at least three chainsaw-carved bears along the ride route. One was a panda. No photos, sorry.

At the end of the ride, we tried to check in, but couldn't find the right tent. We rode home.

I needed time to prepare for my daughter's bowling alley birthday party. That was lots of fun also, but it's another story.
Posted by rigtenzin at 7:14 AM 3 comments:

Just a thought about working from home

Where I work, we're allowed to work from home pretty much whenever we want. We use IM, email and phones to communicate. It usually works great, but I'm trying to get in touch with a working-at-home-today coworker and I'm having trouble.

My IM client shows his status as . I've tried to send him messages, but he's not responding. There are two possibilities. He's ignoring me or he's not really online.
He says he's working at home. Home is where the heart is. His heart is on the golf course right now.
Posted by rigtenzin at 10:00 AM 2 comments: 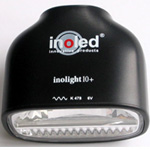 It's this time of year when I install my serious bike lighting. I have a spotlight for seeing the road and a white blinky for being seen. I wear a couple of red blinkies on the my back.

I couldn't find my 10 watt spotlight last week. I dug around everywhere I could think of. I found the mount, the battery, and the wires, but no light. So I rode with only the white blinky in front and didn't feel very safe. I missed the big light.

A couple days ago after giving up the search for the headlight, I bought a Inoled 1 watt LED headlight that works with my current battery and wiring setup. Hiawatha Cyclery had it in stock. I doubt any other shops around here do.

It is noticeably brighter than my old 10 watt halogen (the one I lost). Once again cars stop for me at stop signs and I can see the road well enough to avoid potholes and roadkill. Don't laugh. I once rode with a guy who purposely rode over a well-dried opossum and got a puncture from one of the bones. Smartasses always get what they deserve.

This reminds me that I've often wanted to see what I look like to others on the road (not as roadkill, but at night with my lights on). Maybe I can find a friend or loved one to ride my bike at night and I can follow them in a car. A photo of that would be nice.
Posted by rigtenzin at 7:55 AM 3 comments: 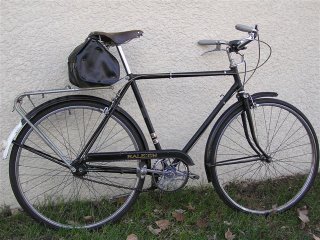 I plan to ride in the St. Paul Classic next weekend, Sunday, Sept. 10. I've always wanted to ride on car-free streets through St. Paul. It's pretty expensive ($30), but I've missed it 11 years in a row.

If anyone wants to join me, let me know.

The next weekend, is the All British Cycling Event (ABCE). I'll attend the swap meet and ride. I plan to ride to that one also. That will stretch my personal one-day mileage record for the riding a 3 speed. The ride starts in New Brighton. I guess that's about 12 to 15 miles from my house. The ride is 45 miles. That should be at least 70 miles. That distance is more of a chore on an upright 3 speed than some might think.

By the way, even if you are not interested in this sort of event, take a minute to read the ABCE website. The writing is lots of fun. The guy who puts it all together is very talented in many ways.
Posted by rigtenzin at 3:10 PM 4 comments: 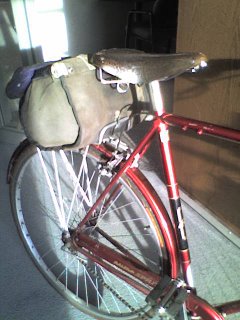 My legs feel tired lately. When I start my ride, it feels like I just completed a few intervals. Later in the ride, when I should be warmed up and ready to ride faster, I still am tired and don't want ride fast.

Instead of fighting this feeling, I rode the 3-speed today. I wore my sandals and just toodled into work. (Toodle is not a real word, but I like it.) I stopped at Brueggers and bought two bagels. The Brueggers is located in a terrible place for bicyclists. It's surrounded by a fairly busy intersection and no way to just safely jump into traffic. I usually ride down the sidewalk a bit and jump off the curb in a burst of speed to fit into a gap between cars.

I took a different tactic this morning leaving the Brueggers, because the 3-speed is not a very good curb hopper. I continued further down the sidewalk and rode under a rail bridge. The sun was rising and threw light through the steel bridge supports. I stopped for a moment and looked at it. The rust on the steel was highlighted by the rising sun. Although I didn't have the creepy cam with me, I have a distinct picture of the bridge in my head. I like it.

I took that with me on the rest of the ride to work and didn't think about my legs until now.
Posted by rigtenzin at 7:45 AM No comments: