I ride past this bumper sticker nearly every work day. It makes me laugh and I thought I should share it. 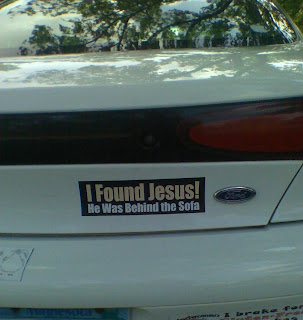 I saw two of these guys in the space of one intersection. They are easy to pass. 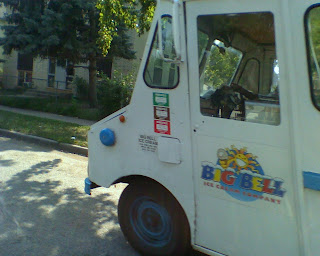 The Hiawatha Cyclery ride went off road today. Not the kind of off-road riding seen in sports drink commercials with rock and roll playing. It was dirt path riding. 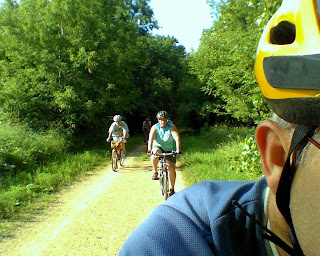 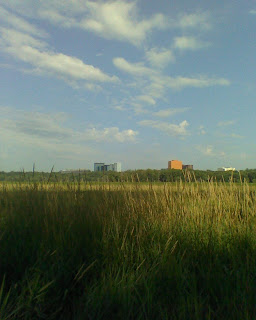 I hear some HC riders are a bit worried about riding off road, but they should feel comfortable with this route. It's so smooth a small child can sit comfortably in her bike seat and enjoy it. 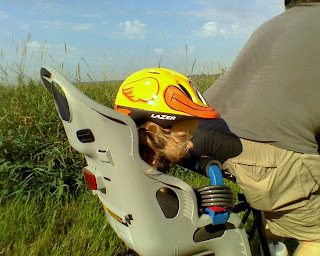 We went to the Firefly cafe for coffee. 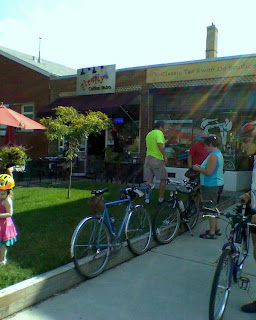 I mentioned to Mark, the HC mechanic, that I needed some mechanical disk brakes for my monster cross bike. He had a set of Avid Road BB7s ready to go. I bought them and some shoes, but couldn't bring them home, because I was riding a bike with no cargo carrying ability. Mark loaned me his Xtracycle. Very nice! I didn't notice much difference compared to any other mountain bike. I expected sluggishness due to the long wheelbase, but found it's just a bike that happens to haul four bags of groceries with no sweat. 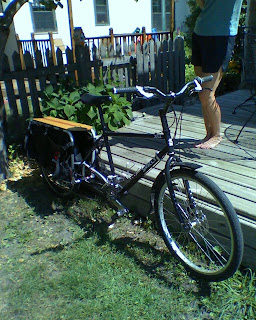 The photos are from my new cell phone that has a bit better camera than the last one. Since it takes video also, prepare for those in upcoming posts.
Posted by rigtenzin at 4:26 PM 6 comments: 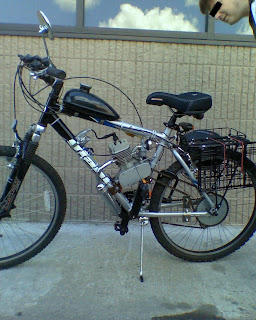 This was locked near the back door at work, the other day (the bike, not the guy). It's a bike with a gas engine kit installed, making it a moped, I guess.

I love projects and modifying things, so this thing impresses me. The "silent sports" guy in me considers a gas engine on a bicycle an abomination. I solve this conflict with the understanding that this gas-powered bicycle is much better than a car and maybe the guy riding it will enjoy himself on his way to work. I also know that not everyone has my ability to ride a bike to work under my own power. Lots of people have physical shortcomings that prevent them from bicycling, but an assisted bicycle may work for them very well.

I'll stick with my human-powered machines for now.
Posted by rigtenzin at 8:16 PM 7 comments:

Smooth Streets are my Friends

The City of Minneapolis is repaving a few residential streets. Two of them are on my way to work. The newly paved surfaces are so smooth that I feel pampered. My tires sing on the fresh asphalt. The old surfaces were very rough and full of potholes that had been patched over and over. I got used to riding on them, but the improvements are really nice. 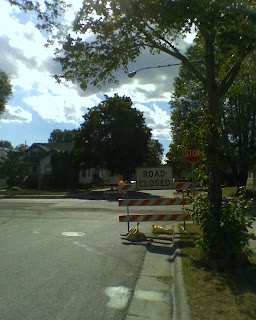 While lubing the chain on my daily commuting bike, I noticed one of the crank arms was really dirty, so I wiped it off and noticed some cracks in the crank arm. I had a replacment in the box of cranks located in the basement. I installed the replacement and all is well. 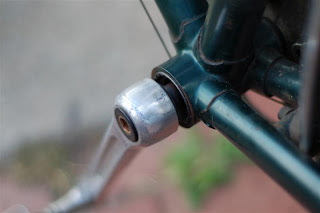 You may need to click on the image to see a larger version (if you are curious and I don't blame you if you aren't).
Posted by rigtenzin at 5:34 PM 4 comments: 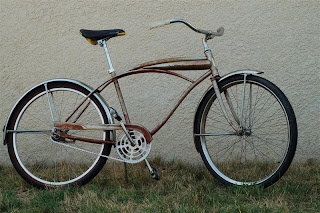 I completed work on the Hiawatha cruiser. As you may remember, the seatpost was stuck. I don't have a bench vise, which was my next resort in removing the seatpost.

I hauled it to Hiawatha Cyclery in my BOB trailer. They (Kevin) put it in the vise and twisted. That didn't do the job. He grabbed the torch and applied heat to the area. It came loose with some serious twisting.

This all happened a couple weeks ago, but I only recently got around to installing the new seatpost and re-assembling the bike.

It's all together and works like its supposed to which is not very impressive. Every time I've ridden a cruiser-style bike, I've been disappointed. This one is no exception to that pattern. I put it in the bomb shelter and it will stay there until it is needed. That will not be soon.

The work it took to remove the seatpost was not really worth the effort. Bill, at Hiawatha, recommended checking for stuck seatposts and stems on old bikes before working on them. Good advice, I say. Although, with this bike I wouldn't have rejected it even if I knew it was a bad egg. It would have been impolite, in this case, to reject the bike. That's another story though.
Posted by rigtenzin at 5:26 PM 5 comments: