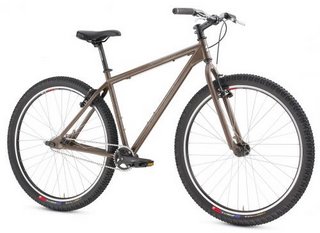 In my last post, I forgot to mention that my new bike is a Redline Monocog 29er. I bought it at Hiawatha Cyclery. They have a few in stock. Mine is a 17 inch.

It's a dull brown color and doesn't really look much better in person than the very poor photo I took using the CreepyCam. I still promise to take a better photo with a better camera.

I've had a chest cold this week and haven't had a chance for a proper ride. I rode it to a park near my house. That didn't tell me much except that I had tightened all the bolts properly.

I'm sure I won't stick with one speed. I've got a few ideas to convert it to a couple- or several-speed bike. I'd like a granny gear and also a bit higher gear for riding to the trail heads. That totals 3 speeds. The MC29er comes with a cassette rear hub that has room for at least three cogs. I tried it out, but the cog spacers I have lying around are all for 9 speeds. The chain is a 7 speed so it rode on the adjacent cog. Tonight I'll go to the Hub Bike Co-op and try to dig up some spacers and maybe a better collection of fatter cogs.

If you are still awake, you may ask, "Rob, how are you going to shift the chain?" Good question. I can do it manually or I could mount a derailleur to do the job. I could use a rear der. with a built-in der. hanger like on cheapo bikes. Another option is a drop-out tensioner with a built in der. hanger. I need to order one. I found a place that has them.

An internally geared hub is the other option. I've got a couple of three speeds on hand that I could try. I hate to sacrifice them though. I hear they won't hold up over the long haul. From what I've read, the Rohloff 14-speed and the Shimano 8-speed red band are the only hubs capable of sustained off-road riding in the vigorous manner that I intend.

And even another option: the Shimano Hone and Saint rear derailleurs mount on the end of an extended axle and don't need a hanger at all. That would be a pretty clean installation and would require another hub and allow nine cogs -- much more than several. Perhaps that's too many gears. After all, this is the 3-Speed Blog.

Lots of options, lots of potential projects. I look forward to them all.
Posted by rigtenzin at 8:13 AM

I built a 3-speed mountain bike a few years back, for riding the Slickrock Trail. I used a 24 tooth rear cog, with a locked up derailleur for a chain tensioner, then ran a 50/36/24 crankset. The 50 to 36 drop was kinda hard for the derailleur (controlled by a friction derailleur on the right side), so I would do a more standard crankset if I did it again. Anyway, I think this is the ultimate setup for a mountain bike, if I could just figure a way to make it fixed gear. I mean, really, all you really use on a recreational mountain bike ride is high, medium and low. Jon Grinder - grinderbikes.com

That's great information. I bought a Nexus 8-speed Redband hub on Saturday afternoon. I'll try to post the steps of the project here.

I think your setup sounds great. I'd like to try that on another bike.