On Sunday, I rode around Lake Pepin with seven others. It was lots of fun and the group of riders were very compatible in riding styles. I suffered a little at the end, but not much. Some people think suffering is good, I don't know. But I'm sure you can't always avoid it.

The group was also pretty compatible with regard to equipment. That's to be expected, because the ride was organized by the Hiawatha Cyclery guys. Thanks for the ride, Kevin and Jim.

This photo includes a Romulus, a Goodrich, and a Rivendell, and some people too. 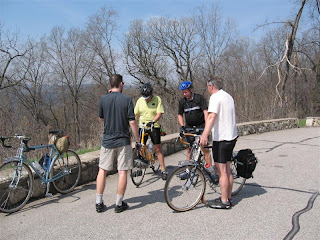 I'm not one of those silly worshippers of all things Riv, but I appreciate the practical aspects of the Rivendell-recommended equipment. For example, it rained during the ride and the fenders prevented the rooster tails from going into the following riders' mouths and eyes. I bought a jar of home-made apple butter from a roadside vendor. If you look closely at the photo below, you can see her sitting at a table past the bakery. I carried the jar the rest of the ride in my saddlebag. I also had a camera, rain gear, a cable lock, and various other items in there. The saddlebag is very helpful and improves the ride experience by allowing me to bring stuff along. 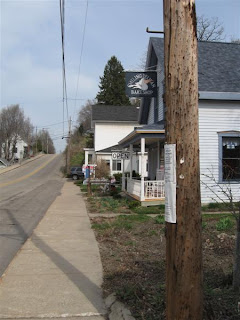 Jim bought a barrel of pickled beets from the same vendor. I hope his wife enjoys the beets.

I'm not saying every rider had a complete Riv-inspired equipment list. No. We have each picked the items we like and use them. Some of us had skinny tires. Some of us had STI.

But we all enjoyed the ride.

Here are a couple of shots of John's bike. It's much nicer than the photos show. 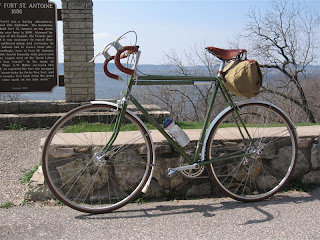 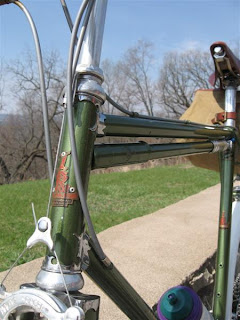 Posted by rigtenzin at 9:41 AM

Hey that John guy's got a sweet ride!

Thanks for not outing me on the carbon fiber...

Wait a minute - a BARREL of something being toted on a bike ride??

I want to own something Riv. I just like the elvishness of it.