I installed a front rack on my Maruishi today. The rack is a Berthoud I bought used from Kevin at Hiawatha. I can't resist putting French stuff on my bike. In the past, I've installed Berthoud fenders that are still there and an Ideale saddle. The saddle was the most effective form of torture known to man. The CIA bought it from me and I'm living off the proceeds. 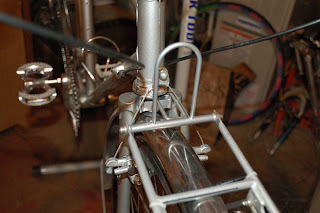 The rack also has a built-in light mount. This is convenient for me because it gets stuff off my already crowded handlebars and mounts the light in a position that prevents the light from being blocked by a handlebar bag. You might be wondering what other stuff I have mounted
on my handlebars. I have a blinking light, a coffee-cup holder, two computers (one in kilometers and the other in miles), a bell, and a perch for my bird. The bird is really my daughter's, but the bird likes me best. 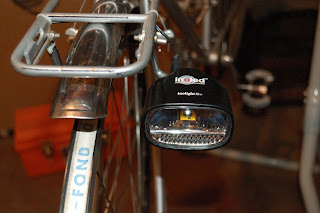 The light I mounted works with a dyno hub and I already own one of those. I've had the Shimano dyno hub for a couple years and have never liked the amount of drag that I noticed. I immediately thought the bearings were too tight, but everyone assured me that's not a problem. I accepted that for a couple years until recently I read an iBob post by a guy who adjusted his Shimano dyno hub bearings and found it reduced the apparent drag.
With this in mind, I adjusted the hub and holy shit! it made a noticeable difference. Now, I've got the whole rig installed: rack, light, and dyno hub.
Does anyone have a decaleur for sale? I initially intended to install a basket on this rack, but it's so cool that I changed my mind and I want a proper French-looking handlebar bag that mounts with a decaleur . The real reason for this is that it will allow me say Berthoud and decaleur in the same sentence. Both of those words sound really cool when spoken with an exaggerated French accent, which I will use. After speaking this sentence, I may find my tongue in a knot, but I'm willing to risk it. 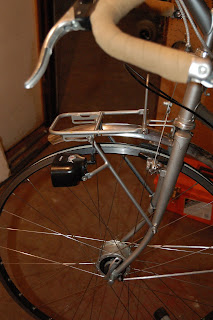 Tomorrow I install the Nokians because it snowed today. I've also have a Huret rear derailleaur in a box somewhere.
The last photo shows the most important tool on the bench and it's not the Allen wrenches -- it's the reading glasses. They let me see what the hell I'm working on. 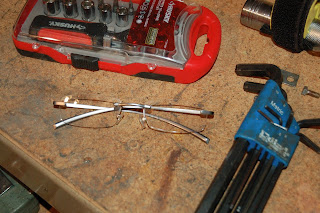 Errands on the Way Home Today

I like the walk-in ATM access at the bank. It means I don't have to lock my bike outside and this saves me time. 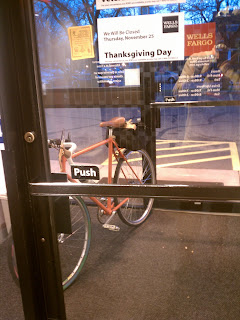 I also like orange bikes. I sat on the one in back and I think it has the most uncomfortable saddle ever, a real ass hatchet. 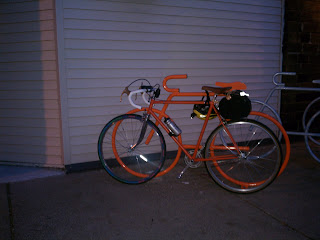 It's dark, remember your lights.
Posted by rigtenzin at 7:02 PM No comments:

Do Klingons have Xmas?

My wife found this flyer at a local coffee shop. I don't like their coffee or prices, so I won't give them a plug, even if my blog only has .5 readers.
Isn't this flyer fascinating? 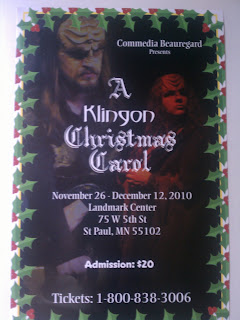 I'm not questioning the legitimacy of this event, but the name "Commedia Beauregard" made me wonder and caused me to imagine the possibility that a prankster could produce flyers like this just for amusement. I apologize to anyone associated with this production if they take offense.
I realize I can do a search or two and quickly find out if this is legit, but I think I'll leave it as a mystery for now -- it's more fun that way.
Posted by rigtenzin at 1:56 PM 4 comments:

I've been taking a little cutoff lately that includes a dirt trail. This is pretty fun on the fixed-gear bike. The trail is not technical with only a couple roots and rocks to maneuver around. I had only one pedal strike. 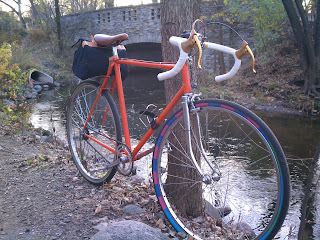 Next, a fixed-gear, off-road tandem?
Posted by rigtenzin at 10:18 AM No comments: