This is the third time I've ridden the Powderhorn 24. I've enjoyed the ride each year, but this year was different because I participated in the bonus lap activities:
The bonus lap stops in the middle of the night were trippy. 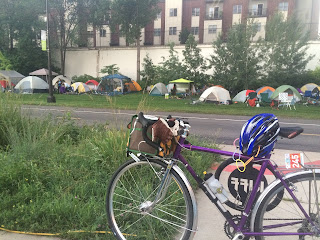 Another New Bike -- But this one really is New!

I took my broken Fisher frame to the bike shop where I purchased it in 2007. They took photos of the crack and filed a warranty claim with Trek. Trek responded with a generous credit toward a new bike. None of the old components were compatible with anything they now sell.

So I looked through the Trek catalog and found their Stache line which feature 29+ tires. I've wanted a Krampus since I first saw one, so this seemed like a good choice. I have a dual-suspension 29er, a fat bike, a single-speed 29er, and a drop-bar, 8-speed 29er. So I didn't need any of those and the Stache line turns me on.

I test rode one at the dealer and really liked it. I figured they'd have to order it for me, but they let me have one from stock. I took a bike home that day.

It really rides well and I enjoy the light weight -- 24.5 lbs.  The best part is the front end geometry. It handles better than any of my other bikes. I cut corners faster than ever and the plus tires keep traction when I expect them to slide out. I've lost traction three times on the front end and instead of meeting the dirt, I saved it. This bike has allowed me to be a better bike handler. I don't miss the suspension parts either.

I will sell a couple of my older off-road bikes and rely on this as my main ride. 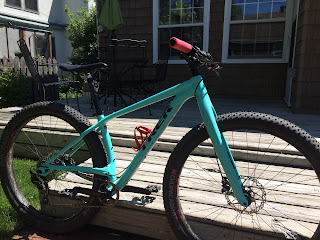 It has a more relaxed headtube angle than I'm used to. It has a 70mm stem -- very short. It has very wide bars too. I think it would be valuable to apply these items to my fat bike and see if it handles any better. I don't really like it's handling, but I'm stuck with it in the winter.
Posted by rigtenzin at 1:52 PM No comments:

My Gary Fisher Sugar broke last fall near the end of riding season. I stripped the parts and found a used replacement frame pretty quickly. Surprisingly, all the parts fit the replacement frame, a Salsa Big Mama. I rode it once or twice before fat-bike season arrived. 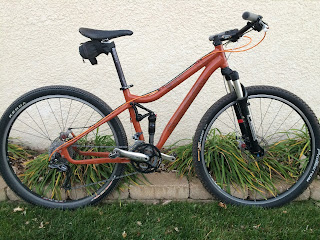 I bought the Sugar in 2007 and Trek has a lifetime warranty. Trek owns the Fisher name, in case you didn't know. The replacement frame looks a little small doesn't it? It rides enough like the Fisher, that I am happy with it.
Posted by rigtenzin at 1:39 PM No comments:

Got My Stolen Bike Back

My Redline Monocog 29er was stolen from my garage one Sunday afternoon in fall of 2007.

A couple months ago, a guy messaged me through the local mountain bike site. He asked if I such a bike stolen, because he had it.

After a couple back and forth messages, he called me and we arranged for him to bring the bike to me. He explained that he bought it for $100 recently from a guy who had it in his garage for years.

He delivered the bike and I gave him $100 for his trouble. The bike was unused and rode like the day it was stolen.

I installed dirt drops on it with a Jtek shifter for the 8-speed IGH I had installed right before the theft. It rode well and I really like it.
Posted by rigtenzin at 1:32 PM No comments: