Raleigh Sports for Me

I bought a Raleigh Sports today at MMRB's 3-speed sale. The bike needs a seat and tire work before I can ride it. I'll even do a little more. I don't have any plans to make it look like a showroom beauty. I want a rider.
I recently bought some Lauterwasser bars from Soma Fab. I may install them on this bike -- the bars need to go somewhere. 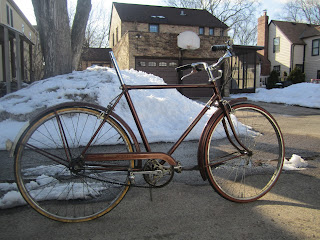 Why do all these old bikes that have lived undisturbed in garages have hair wrapped around the pedal spindles? It's a little gross. Click on that photo to see a large version of ugly. 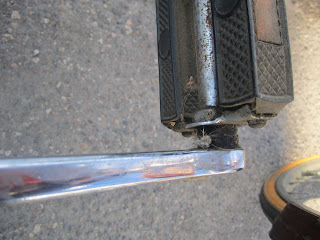 Someone used a shoestring to keep the hub shell clean. What are those things called? A hub shiner? That sounds dirty. 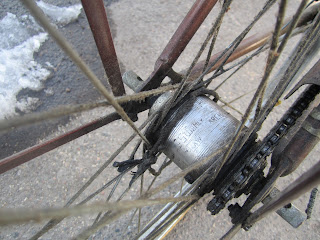 I really want a pair of Panaracer Col de la Vie tires for this. Who has them in stock?  I should just go to Hiawatha and have them order a pair for me. I've been thinking of a bike just like this for a couple years and Panaracer Col de la Vie tires have been part of my vision all along. Without them, I have failed this bike.
Posted by rigtenzin at 5:37 PM 7 comments:

I'm having surgery next month to remove a floating, bone growth from my ankle. I thought I had a bad Achilles tendon, but that was wrong. This has been a problem for two-and-a-half years. During that time, I've gone from an active, sporting cyclist to a plodding, occasional rider. I'm hopeful that I'll return to my old self after healing from the surgery.

I won't say much more about this, but I thought I'd reveal this to those of you who may be interested. The rest of you can just ignore this.

The growth is officially known as a Haglund's deformity. That has a nice sound, doesn't it? If you look it up, I want you to know that I don't wear pumps.
Posted by rigtenzin at 10:24 AM 6 comments:

I like this photo album of bicycles provided by the BBC.