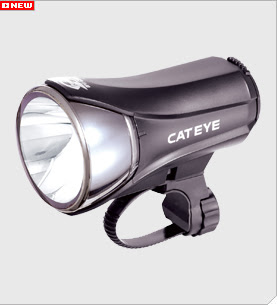 I bought a new headlight. I wanted a light that I can easily move from bike to bike. Sometimes I want to ride a different bike to work, but the Inoled is too difficult to quickly setup on another bike.

So I bought the Cateye HL-EL-530. It's 50% brighter than it's predecessor, the HL-EL-500. I have no idea how to prove that. We can't really measure a light's brightness other than using the eyeball test. The manufacturers can tell us anything they want. Someone with access to brightness testing equipment should test a bunch of lights and publish the results. That's the role of a bicycling magazine. But they're too busy selling us the latest bag o' crap from their advertisers to actually spend resources reviewing products in a useful manner.

What can I tell you about this light? I've got a collection of Cateye lights and the new one is far, far brighter than any of the others. However, I don't own the HL-EL500 for comparison. I know a guy who does. I think I'll challenge him to a duel (with lights).

Tonight, I'm going to compare it and the Inoled, side by side.

It mounts very easily. They've put it on a mount that tightens with a thumbwheel/dial thingy. It's similar to a hose clamp that you can operate with your fingers instead of using a screw driver. The light also snaps off of the mount with a quick release. One of the coolest things about the mount is that you can adjust where it points horizontally a few degrees. My 3-speed handlebars have a slight bend in them and this causes the light to point to the left a bit. The horizontal adjustment feature allows me to point the light straight ahead.

The pattern has a very distinctly focused center -- just like a spotlight. The outer areas are also illuminated, but much less than the center area. It's a very different pattern from the Inoled. I like the Inoled pattern better, because the strongest part of its pattern is larger. Many light reviews I've read talk at length about the details of the light patterns. I've never really followed their descriptions. I get lost in the text, because the descriptions are too abstract. I need to see a picture of the pattern to understand it. So that's what I'll do for my next post. I'll try to photograph the light pattern.

Posted by rigtenzin at 7:29 AM

I've been contemplating a brevet series scheduled for May, so lights are a current topic of interest to me. Peter White Cycles seems to be a good source of info and lights.

Bring it on man. Light sabers at 10 paces.

Do you have any lights that require a dongle?

The commenter named "Allen" is not real, because he does not have a blog.