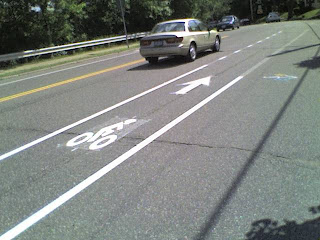 I'll try to post photos of some of both types.
Posted by rigtenzin at 8:03 PM

I just saw this yesterday and was going to pass it along to you, or post it on my blog. It pretty much sums up how I feel about bike lanes.

Thanks for making me think about them.

There are lots of opinions on bike lanes for sure. A road design that is wide enough to accomodate bikes is fine with me.

That's the type I ride every day. Most vehicles here move left across the yellow line, but it's really not necessary.

There is a bike lane on Minnehaha Ave in St. Paul between Western and Dale. It must be used frequently by trucks hauling little rocks. Because there are always loads of them cast off into the bike line.

If there was no bike lane, I'd say, "eh, just the nature of that road" but since there is a bike lane, I feel entitled to a rock free ride.It makes me wish they hadn't bothered with the paint.

For an example of an awful bike lane, try the lane down the middle of Hennepin Avenue in Minneapolis at oh, midnight. Head west on it, only to discover, it abruptly stops or disappears like only a government sponsored (failed or incomplete) project can.