Bike Repair on a Rainy Day

I haven't been riding this three-speed lately. It 's saddle was ripped, due to dry rot. It had a flat tire also. I fixed the flat yesterday and replaced the saddle. When I gave it a test ride down the alley, I noticed the new seat was too high. While adjusting the seat I also replaced the seat binder, because the old one needed two wrenches and it was so long, causing it to catch my pants. 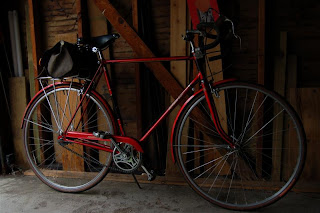 During the second test ride down the alley, I heard the rattle of the broken rear fender mount. It broke during the Lake Pepin Three-Speed Tour. I used a bright green zip tie to fix it back then. This time, I found a mount from a set of Planet Bike fenders. The Planet Bike mount fit as if it were designed for the old Raleigh. You can see it in the photo below. It's the black thing between the brake caliper and the fender. 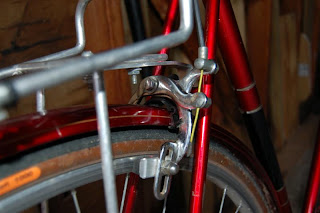 I took a few photos and played with the depth of field. 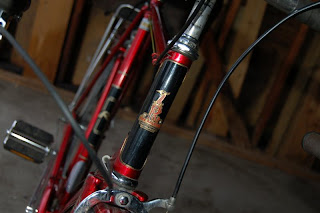 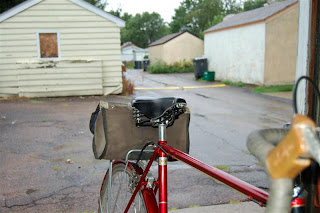 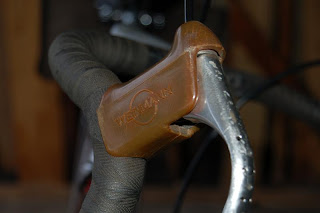 Posted by rigtenzin at 4:26 PM

The original bars were standard uprights, like on a typical three speed. As long as they are high, I think drop bars are as pleasant and leisurely as upright bars.

I'm not questioning your choice. If it feels good, do it.

I think Pete is judging, if not questioning.

I have a Raliegh cruiser of the same era that is in fine shape but needs some basic tuning. Where is a good place to have this done (as I have no bike repair skillz)?

Absolutely Jim. I'm nothing, if not judgemental.

Missy: Try Hiawatha Cyclery. It's located on 42nd Ave. and 54th Street in Minneapolis. It's near the Veteran's Hospital.

Don't tell them I sent you though. I don't want to look like a suck up.

Freewheel on the West Bank is a nice shop also. There are other shops I like, but the main point is to stay away from the Big Shops. They sneer and mock old, practical bikes. They want everyone to ride bikes made of carbon fiber with too many speeds. I'm exaggerating, but I find smaller shops more helpful when it comes to old bikes.