I traveled to the Chequamegon National Forest last weekend with six other cyclists for our annual off-road ride. The trails are located near Cable, WI. On the way to the trails, we stopped at the New Moon Bicycle and Ski shop. I bought some fantastic tires (Kenda Nevegal foldables for $17.99 each) and we found out we were there during a special deer hunting season. They created the special season to reduce the number of does, so they said any antlerless deer could be shot.

One of the bike shop workers told us to wear blaze orange for safety. Then we made a few drunken hunter jokes. One guy suggested we put antlers on our helmets.

A woman standing in the store overheard us.She told us it was an unfair stereotype to lable all hunters as drunk and irresponsible.

I agree with her. Like your teacher told you, it only takes a few bad apples to spoil the whole bunch. We bought orange vests. You'll see photos of that here later. 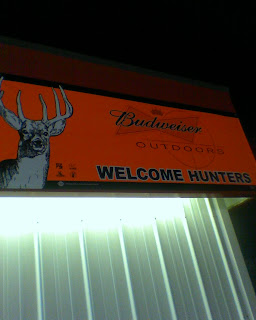 I'll admit that I read this post only from the title. It would be a good band name.