I received this saddle a couple of years ago in a mass purchase of saddles. The logo says, "Rido" and has no other markings, not even the country of origin. 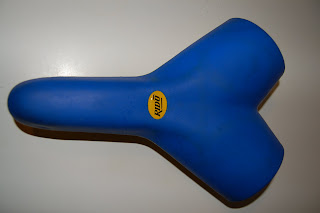 I never rode it (why would I?) and had no plans to until recently. An author of an article in Velovision magazine said he found it a very comfortable saddle that he used on his everyday bike. I'd never seen the saddle anywhere else, so I was interested by his recommendation.

One important thing mentioned by the article's author is that unlike many other new-fangled saddle designs, this one has a nose and the nose is important for steering your bike. 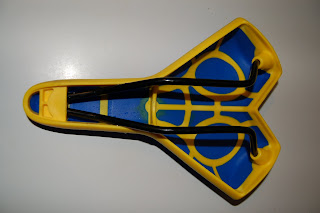 I pulled the saddle out of the parts box and washed it off. I noticed the yellow part is hard plastic and the blue portion is flexible rubber. I may give it a try if I find a suitable bike. The bike would need to provide an upright position and be colorful. Perhaps a clown bike would do.

I'll let you know what I think about it after I ride it. Until then, please don't order large quantities of them, OK?
Posted by rigtenzin at 5:15 PM

I want to know what their marketing department was thinking. That's got to be the ugliest looking thing I've seen in a while.

Evan, I agree. But after a while it grew on me and now I'm ready to use it.

Man -- I would imagine you will need a proctologist on speed dial after you ride that awhile.

Anonymous said...
This comment has been removed by a blog administrator.
9:00 PM

Come on man: think of something blog-worthy...we are all counting on you!

I'm with Jill. That is one crazy saddle.

P.S. What's with the comment moderation? Has there been a bad apple about?

I've been receiving spam comments and I decided to try and prevent them from showing up by using the moderation feature.

Is it too annoying?