I purchased a Shimano DH3N70 generator hub (correction: it's a DH3D71). It's a pre-built wheel from Hiawatha Cyclery. The price was good enough that it wasn't worth seeking a hub, rim, and spokes, then building the wheel myself. I bought it Saturday afternoon, strapped it to my bike, and rode home. 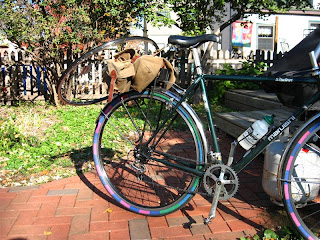 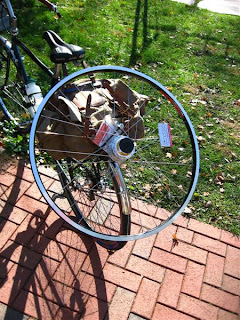 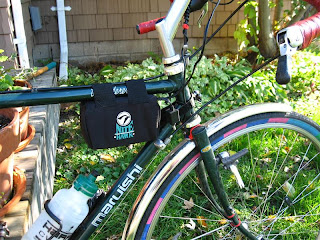 Here's a photo of the wheel installed, but no wires are in place yet. 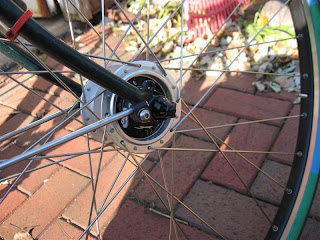 This shows the holes for the wires. At first, I was a little bit lost as to how the get the wires in there. 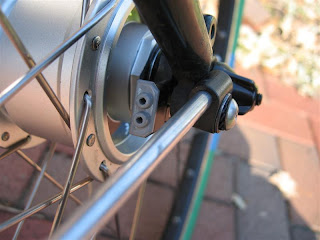 I found a PDF of the instructions for hooking up the light in a Google search. This looks like a lost Lego part, doesn't it? To remove it from the hub, you just pull it off. It only took a little strength. 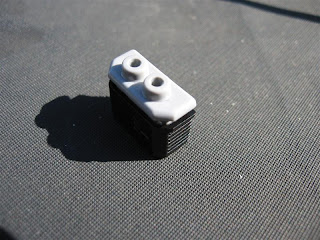 It's a two-piece affair. I popped the two pieces apart by pressing a tiny screw driver into a slot on the back of this piece (the slot is not shown in the photo) and prying them apart with my fingernails. 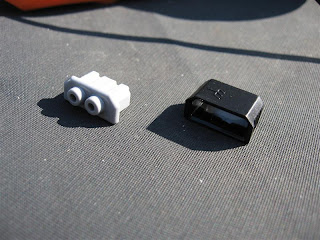 Then I fed the stripped wire ends into the holes and bent them over into the little channels shown here. At the point this photo was taken, I had only bent over one of the wires. After bending the wires, I snapped the black cap back onto it and plugged it into the fitting on the hub. 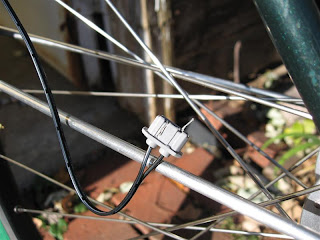 I rode it around in the daylight. From what I've read, some people claim that they notice the increased drag. Others say there is no noticeable difference. I couldn't tell during my quickie test ride.

I'll compare its brightness to that of the battery pack tomorrow morning. It'll be an easy comparison, because I can change the power source from the hub to the battery by plugging in the other wire.

Just for fun, I recorded a video showing the drag created by the generator hub. I compare it informally to a conventional hub. I'm not worried about the drag, but I thought it would be nice to show it, because the topic always comes up in conversations about generator hubs.

Posted by rigtenzin at 6:29 PM

Hey, 3-Speed. Good video about the hub. Comparing the two wheels made the point.

By the way, I've changed my URL yet again. Last time, I promise. The new one is:
http://revrunner07.blogspot.com

I think buying a dynamo hub for my bicycle is the single-best bicycle related purchase I've ever made.

If you are really in tune with the feel of the bike, you can tell a tiny little bit if you switch your light on and off while riding. But, the convenience of never having to charge a batter IMHO it WAY worth it.

Keep us posted on your findings.

If I'm out wiht a group and think I'm working harder than I should and know I've pumped up my tires... oops, I've left my light on. Otherwise, I don't notice it. I love just having the light; it's there.

I've got that same hub on my commuter set up with a Lumotec headlight. It's a great system. Regarding drag.........now I won't have any excuses not keeping up with you!

Your mileage may vary.

Sometimes you notice and sometimes you don't. It's just a little buzz when you do, but I'm generally focused on the senses of sight and sound when riding at night.

One thing I'm sure of is that the Schmidt is not worth another $100.

Bike parts are so strange looking when they are new and clean. I'm looking forward to hearing about your experiences.

What the world needs is the hybrid drive hub. When you brake the dynamo stores energy in a battery that you can later use to accelerate.

Brilliant - in more ways than one. Ha!