I made it to the HC ride today. We rode East to St. Paul- into the wind. About two blocks from our food destination, Andre's front tire flatted. He brought the wheel into the cafe and fixed it. I wish I could do that when I have a winter flat. I mean drinking coffee while fixing a flat is pretty nice. 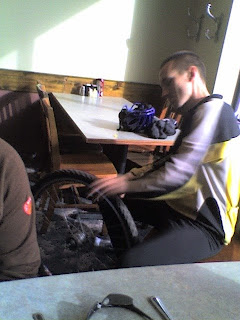 Last week, I had a slow leak on my ride to work and decided to stop and fill it instead of fixing it. I had to fill it twice before I arrived at work. In warmer weather, I would have fixed it on the spot. 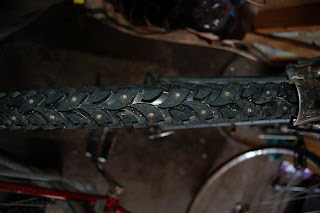 I'll tell you why this subject is important. Riding studded tires is a compromise between safety (traction) and ease of pedaling. Studded tires are much heavier and I believe the studs slow you down. This is so noticeable that I've come to see studded tires like wearing a condom -- they almost ruin the feel of the bike, but I'd hate to have an accident.
Posted by rigtenzin at 11:55 AM

Condoms are for pansies.

You better (TM) that last line. That was funny stuff :-)

I'd have to agree. This is my third winter with studded tires. I can't imagine riding without them. Having said that, I think I could have ridden most of the days since Jan 1st without them. We've had very little snow or ice on the road. Yet I've ridden with the studs every single day.

Yet another stud weenie here. I haven't ridden a bike without studded tires since November 26th.