This bike is loaded less than what it looks like. The orange pannier contains a well padded laptop and is very flat against he bike. The bag on top holds my work clothes (a loin cloth and a dagger). The right side of the bike is empty.

I have a brief case/pannier that broke yesterday afternoon. I may be able to fix it, but the point is that it held the laptop horizontally and the orange one holds it vertically -- meaning the orange one puts the weight lower on the bike. This should make the bike more stable right? At least that's what the touring know-it-alls say, "Weight mounted lower is more stable."

It's not true in this case, because I felt shimmies all the way to work this morning. They felt like they were coming from the rear end of the bike and traveling through the frame to my handlebars. I realize it was a magnification of my imperfect pedaling style.

Despite that it was a fun ride in. The temperature was about 8 degrees warmer than yesterday, making it just right. 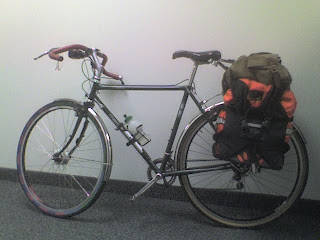 Posted by rigtenzin at 7:14 AM

Sometimes my bike fishtails. I have a wire basket behind the seat and put my bag there.

Loin cloth and a dagger? Where do you work, the Ted Nugent society?

I carry my laptop in a padded case on its side in my pannier all the time. Now that it's totally dark for my morning commute, I carry a Niterider battery/tail light and U-lock on the other side, but even when most of the weight is only on one side, it never seemed all that noticeable when moving.

Armchair theorizing: I bet the shimmy would go away if you put some of the weight in the front. That rhinestone-encrusted loincloth should be enough weight to do the trick.

Another armchair theorizing: have a stiff drink before you leave home. That'll knock the shakes off ya.

Let's not be blaming the bike. You know that as your home-made salsa induced methane exits it's causing you to wobble. You need to aim that sh!@ better

I generally only carry one pannier loaded up with all my crap (which can be a lot sometimes) and my bike gets the shimmies bad but only if I coast with no hands on the handlebars. I put it down to load distribution as I've had motorcycles do the same thing with too much crap on the rack.

If I put one pedal to the bottom of the stroke and weight it I can reduce the shimmy or delay it but I can't recall if it's the pedal on the same side as the pannier or opposite it.

I agree with Papa Jim. I read somewhere that many touring bikes are set up to be very stable with a load over the front wheel.