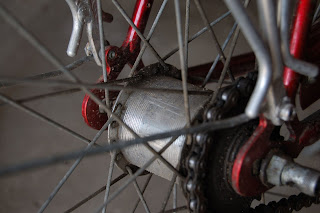 I've ridden my three-speed bikes exclusively this winter and this has given me enough experience to comment on the gear ratios of the Sturmey Archer AW (both of mine are AWs). The AW has a direct drive gear and then a gear that is 25% lower and another that is 33% higher than the direct drive.

The 25% reduction gear is great. I use it when starting from a stop, especially with a loaded pannier or a load in the basket. As I accelerate, I get into the direct drive gear quickly and remain in that gear most of the time. When I need a higher gear for downhills and tailwinds, I don't use the 33% increase gear, because it's usually too much of a jump. I'd like a 25% increase instead. That would be great.

I know Sturmey used to sell a mid-range hub (the AM) that had smaller differences between the gears. I think it's called the AM. Correct me if I'm wrong. Does anyone know if the guts of these
two hubs are interchangeable? 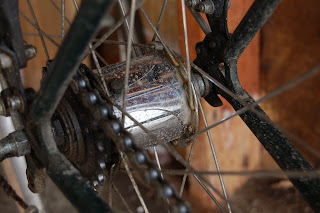 I also have a Shimano 333 hub that I'd like to build up. I can't find the ratios for it. Do any of you know? I've read that Shimano 3-speed hubs are less durable than the SAs. Any opinions on that? I bet the parts are difficult to find for old Shimano hubs.
Posted by rigtenzin at 3:25 PM

I have an FW stuffed into an AW shell. Seems to work. I could be talked into a reasonable trade.

Have you seen this?
http://www.sheldonbrown.com/sturmey-archer.html

RYN about awful food in the North End of Boston. I have had my share of those. The one thing to look for in the Italian district to ensure a good meal. Look for Latin American cooks. Preferably El Salvadore. De Donde Eddes? (From where are you?) El Salvador ests mui buen. 8>)

I had two Shimano 3S hubs (which, as far as I can tell are slightly different to the 333 though I gather they are from the same era) and I don't know what the ratios were, but they were pretty good. Sadly, their reputation as a fragile hub is deserved (hence I had two). In both of mine the drive pawls broke (diagnosis incorrect heat treatment). I ended up replacing it with a Nexus 8.

Jim: I'm sure I can come up with a trade item, cash if nothing else.

Lemmiwinks: I'll probably build the Shimano sometime, but I won't expect much out of it.

I used to ride a SA 3-speed in St. Paul. These days I wish I had a good low speed in my Shimano Inter4. I need to look into getting a larger gear for it.

What sprocket size are you using?

If you go with a slightly larger one, you might bring third gear down to a more useful range for you.

You should also consider the Sram T3 or I-Motion 3 speed. It has a narrower gear range than the AW, weighs less, and is very slightly more efficient.

"You should also consider the Sram T3 or I-Motion 3 speed. It has a narrower gear range than the AW, weighs less, and is very slightly more efficient."

I'm pretty sure the SRAM hubs have a wider gear range: 186% compared to 177%. Not sure about relative efficiency, but the weight difference is supposedly ~200 grams.