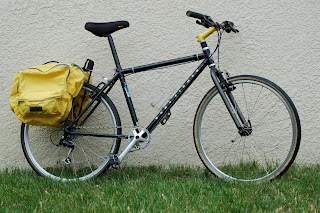 I built this bike as a backup offroad bike a couple years ago and never rode it. I rebuilt it last fall and determined it was too small. Recently, I decided to get rid of it, because it's taking up room. I turned it into a commuter by a installing skinny road tires, a rear rack and a set of old panniers I had sitting in the basement. I put it on Craig's List this afternoon -- no calls yet.

The fork rake looks crazy. That's partially due to the angle from which I took the photo and partially because it is a bit of a crazy angle. The bike had a Manitou 3 suspension fork when I received it. So I replaced it with a rigid fork that is suspension corrected. Well, I should have looked at how much correction it had. It rides just like it looks, kinda crazy.

Wish me luck.
Posted by rigtenzin at 8:29 PM