My First Ride at Murphy Hanrehan 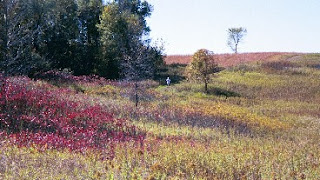 I rode the new mountain bike trail at Murphy Hanrehan park in Savage, MN with some friends on Saturday. This is a new trail that replaces an old one. The old was us, to use the trail builders' vernacular, unsustainable. I know the people who maintained the trail hauled lots of dirt and gravel in there each year to rebuild the trail that was damaged by erosion. Some of the hills went straight up fall lines.

I'll miss one of those hills, the Vomitron. It made me want to vomit after riding up it. It was steep enough and long enough to break a rider's spirit, then it turned a little to the left and got steeper and the traction became more difficult. I started riding that trail when I was 31 and thought it was a hoot. At 43, I thought it was a hork -- as in hork up my last meal.

Well, the Vomitron is gone and somehow replaced with a trail that never seems to go up much and feels like it goes down most of the time. I don't know how that works. The trail definitely goes up, but it's so gradual that I never felt as if I were climbing. The new trail is very twisty and has a few obstacles built in. You can walk around or bypass them all and the obstacles are rare enough to not break up the flowing feel of the trail.

The trail passes in and out of woods and prairies. The contrast makes it memorable. Late summer wild flowers covered the prairie areas in a most distracting way. Staring at wild flowers while single tracking can cause problems, so don't hesitate to hesitate.

The trail is about 10 miles long and the majority of it is one-way traffic. I'm looking forward to taking a few of my other riding friends out there. My wife and a certain sister-in-law will love it. My sister-in-law is the type of rider that lets out hoots and hollers when she's having fun. It makes riding with her something to look forward to. Fun follows her.
Posted by rigtenzin at 7:35 PM

How's this rate for difficulty? I've never really MTB'd before, but I really want to try. I have a buddy who'd love to take me out riding.

Thanks - gotta call my buddy and borrow his bike.

Hmm, sounds like that would be the perfect spot to take the cross bike on a date.