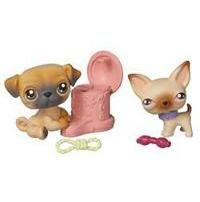 My kids want a dog. I'd love to have one around, but the work involved is more than I know my household could stand. We don't keep up with the day-to-day stuff well enough as it is, much less with four more legs running around.

I told my kids to train themselves for a dog by cleaning up the droppings in our neighbor's yard. We have three neighbors with dogs and I bet they'd be glad to have the help. The Minnesota winters make removing the droppings less unpleasant, because they become solids after an hour or so. The kids thought that was pretty funny, "Yeah. Right, Dad."

It reminds me of a story my sister told me about my nephews. I'll probably get some of the details wrong. But here it goes anyway.

They were little guys, under 10 years old for sure. Their job was to pick up their dog's droppings. They had quite a bit to clean up and used empty bread bags to collect it. They got into a fight and started whacking each other with the bags of droppings. The bags broke open and they both were covered in the mess.

When my sister discovered the disaster, she made them take baths. They understood the need for a bath, but they were really mad because she also made them wash their hair and it wasn't their night to wash hair.
Posted by rigtenzin at 8:49 AM

My kids want a second dog, but we always tell them they don't take care of the one we have. We've sent them out with bags to pick up the back yard before. They haven't started swinging the bags. Yet. Eeew.

I like to mock-swing the poo bag at my hubby when we walk the dogs. He doesn't think it's funny.

that is a funny story. such a good task for kids. coming in contact with poop at a young age builds character.

i found it easier to clean up after the dog in summer... the poo gets lost in the snow and if you don't find it right away -- you'll find lots of it in spring.

I thought I'd eventually figure it out on my own, but I was wrong. What the eff is that pink thing in your photo?

Face it: you're getting a dog.
Remember: Poop=fun!
You should make them "volunteer" at the animal shelter.
There should also be an agreement that when they pick one out, you get to name it...I'm thinking Allen : )

Allen is a great name for a dog.

I don't know. I'll ask the kids. They have a ton of those little characters and the associated equipment. It looks like a toilet, but that would be wrong.

We have dozens of these animals around, but not one of those. I looked it up:

These adorable little pals come with a tempting treat container that “magically” opens when one of your new friends touches the paw print!

Your story made me laugh out loud!

Maybe the kids would be more likely to help the neighbors if you referred to the droppings as "yard sausages."