Just What is Argyle?

Our ride leader took us to the Aster Cafe on the Mississippi River. If I'm not mistaken, this the St. Anthony Main area. I've also heard it called St. Anthony on Main. The streets are cobble stone and the area has a nice personality compared to a construction zone on Lake Street. 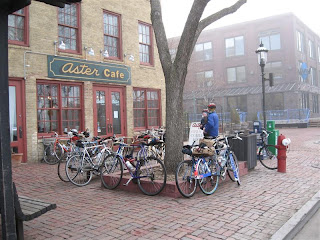 Our ride leader found his way through the fog. I could see about 20 feet ahead of me. Then I realized my glasses were covered with moisture. I took them off and then I could see about one block. People with better eyesight claimed there was no fog. I'm going to stop drinking Windex before rides. 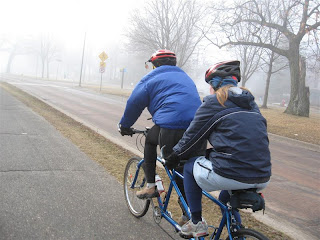 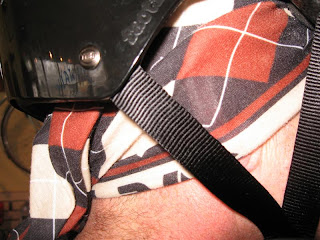 A: No. This is the side of Ray's head, but he's wearing an argyle headband/do rag thing. 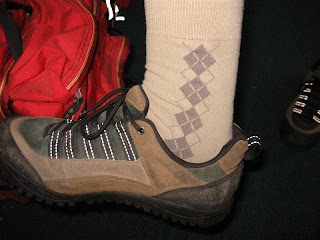 A: No. This is Pete's foot. He wearing argyle socks though. He should consider a career change to footwear model. His ankle is quite fetching. 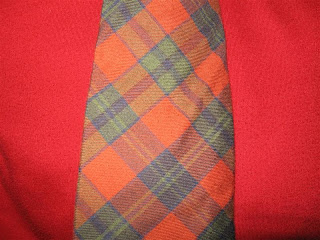 A: No. This is my tie. It is not even an argyle pattern. It's merely plaid turned 90 degrees. I bought it at the Gap about 10 years ago. I should take it back. I wanted argyle.

Wikipedia has a little article on argyle. It says, "The argyle (occasionally argyll) pattern is one containing diamonds in a diagonal checkerboard arrangement. The word is sometimes used to refer to an individual diamond in the design but more commonly refers to the overall pattern. Most argyle layouts contain layers of overlapping motifs, adding a sense of three-dimensionality, movement, and texture. The over-lapped argyle design is claimed to be the oldest known attempt at three dimensional spacing in history.

The argyle pattern is said to have been derived from the tartan of Clan Campbell, of Argyll in western Scotland."

That explains my inability to previously recognize argyle -- I'm Welsh and we don't give a dam about fabric patterns. As long as it's cheap, I'm happy.
Posted by rigtenzin at 12:42 PM

I think from the wikipedia definition your tie does technically qualify as argyle. But there should be an asterisk next to it, like Roger Maris' home run record.

I love the Aster Cafe picture! No sign of cars anywhere...

Argyle theme?? That is SO cool! You guys get up to some fun stuff. That fog sure made for an interesting "opposite day" ride experience. Felt weird to have to take off my glasses to see.

Oh, and I, too, love that Aster Cafe picture. It looks like it was taken in Europe somewhere. Lovely.

Better throw that plaid tie in the washer because you'll need it this week for business meetings.