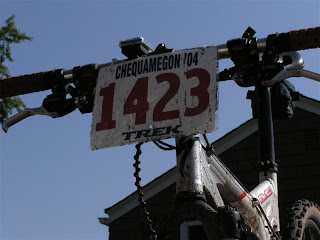 I received my confirmation card on Monday that told me I got into the 2007 Chequamegon Fat Tire 40. I try every year to get in, but because it's a lottery, I don't always make it. That makes it even sweeter when I make it.

This gives me something to shoot for during the summer. I'll ride a little harder and a little farther. I'll try to be nice to all sorts of people with the goal of finding this year's Shuttle Boy. That's the person(s) I rely on to drop me off at the start line and meet me at the finish line. It requires most of that person's day and they have to listen to lots of bicycle bullshit talk. After the race, I have to relive every turn and bump in the trail in torturous detail. It becomes annoying after a few minutes, but I go on for hours. If Shuttle Boy rides bikes, he is usually hooked and wants to ride it the next year. That's good. If they're not interested, they seem to be conveniently unavailable for Shuttle Boy duty the next year. Selfish bastards! Shuttle Boys never last more than one year.*

My riding buddy, who I believe also got in the race, has a new helmet cam. I think that will help us relive the glory.

I have another bad habit related to this race. I tend to buy a new bike very close to the race date. That reminds me of a fun story. I'll post that later.

Now, it's time for more coffee.

This is a random photo of the finish line area of the race at Telemark Lodge, Cable, WI. The festival after the race is fun. I don't know the shirtless hooligans. 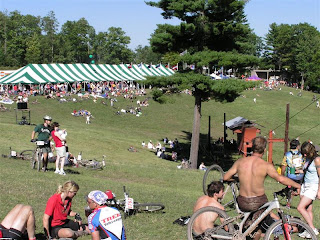 This photo is sunset at my brother-in-law's cabin where I often stay after the race. There's a loon calling out there somewhere, can you hear it? Actually, it's the sound of the drunk couple down the shore arguing. 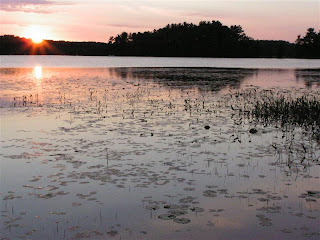 Posted by rigtenzin at 8:42 AM

A helmet cam!!! That is too, too wonderful!!

I wanna see that footage!

While you were at home eating bon bons last year I trained in a new shuttle...team. They had some rough moments, but I think I'll have them in top shuttle form by the end of summer.
I need to find a wipe for the helmult cam lens. Maybe a very small wiper from a Yugo would do the trick?!?!