I Rode a Different Route Today

My usual route through Minneapolis to work was closed today. I normally take the 10th Avenue Bridge across the river, but it was closed. For those of you who don't know Minneapolis, it's the little white bridge next to the collapsed 35W bridge. You've probably seen in news photos.

On the way to work, I went east into St. Paul. This route avoided any contact with the area surrounding the collapsed bridge. I didn't want to contribute to crowding around the area.

On the way home, I plotted a very complicated route through the University of Minnesota using a map. When I arrived in the campus area, I got on the Washington Ave. bridge and just rode west following the painted bike path through the campus. 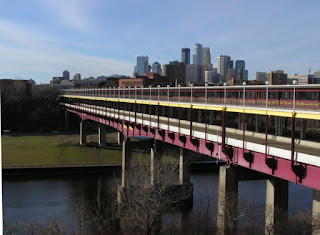 I ignored my planned route and used the Wiseman Art Museum as a landmark. 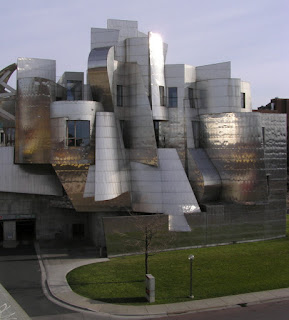 I popped out right near where my old route carried me. I realized I found a better route by just following the paint lines of the bike path.

So I ask myself, "What do you think of bike lanes now?"
---------------
I'm sorry for all those people killed and missing and I'm especially heavy hearted for their families. Waiting for news about a missing person would be one of the most difficult things ever. I know there are people sitting by their phones waiting right now. That's hell.
Posted by rigtenzin at 7:43 PM

I wondered how the collapse might be affecting you. Thanks for the update.

I suspect there will be a lot of folks searching for new routes in the weeks and months ahead.

rigtenzin said...
This comment has been removed by the author.
11:30 AM

It's no problem for me. I like finding new ways through town, especially this part of town. The streets are angled in lots of different ways and they have funny names.

You might find yourself at the corner of SE 8th Avenue and SE 8th Street. The street names are only useful for finding an address. Navigation should be by feel around here. I bet Lunatic Biker finds it really easy to navigate these streets. He has the directional sense of a migratory bird.