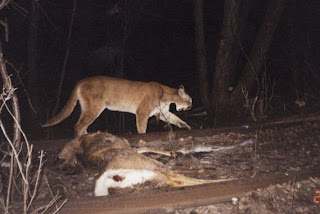 My last post mentioned some poo I found on a local bike trail. Matt-J thought it might be mountain lion poo. I had thought of that, because it's commonly known that a mountain lion lived in the area a couple years ago.

I found the thread about it on the local mountain bike site (MORC).

The thread is pretty funny, but it's serious too. I used to ride that trail at dawn with regularity. After reading about the cougar, I've been less eager to place myself in that situation.

The funniest comment is the one that says people will start inviting slow riders along for their group rides. I assume, they mean the cougar will eat the slow rider first.

The photo of the mountain lion I inserted here is from the thread. Scroll down in the thread several comments to see the photo. Click on it for a larger size version.

I did a tiny bit of research and found that cougar poop is about the size of a large dog turd and is usually filled with hair. It is segmented and has rounded ends. This describes what I saw on the trail pretty well. The internet sites I found that had photos were old dried up scat. The stuff I saw yesterday was still glistening. If I had taken a photo of it, I would apparently have the only fresh looking cougar poo photos on the internet.

Of course, this is not definitive. It may have been from another animal.
Posted by rigtenzin at 8:58 AM