My Ride at Levis/Trow Mounds

Last week, a nameless friend and I rode our off-road bikes at Levis/Trow Mounds. Really, my friend has no name.

First off, Levis/Trow Mounds is a confusing name, I think. Here's the background that might help it make sense. The place is located in Wisconsin near Neillsville which is East of Minneapolis about 2 hours. In that area, they call the hills mounds. The trail was originally only on Levis Mound. Then they added the trails on Trow Mounds. So it became known as Levis/Trow Mounds. Sometimes it is pluralized. It must be confusing to even the people who live there.

Don't let the confusion stop you from going there. It's a wonderful group of trails. We rode for more than three hours and didn't do any back tracking. We didn't ride all the trails either, but I want to go back and plan for more time, because it's worth a day.

We started from the trail head and ascended through pretty deep forest. It was a very easy climb, but slow because the trail is littered with rocks and roots. My newest dual-suspension wonder made it pretty smooth. I bet a rigid bike would make it a more manly ride.

My nameless friend, heretofore known as Nameless, had ridden there many years before and remembered an overlook we could climb to. We had to dismount and scramble up rocks to get there. Nameless brought his camera and took the panoramic photo you see in this post.

The trails are mapped and have lots of signs to guide you. If you are paying attention to your map and the signs, you'll never feel lost or misdirected. The trails are named like ski hill trails. I enjoyed everyone of them, but a few stand out.

Toadstool includes large rock formations with a gap big enough for bikes to fit through. The trail builders added a wooden bridge that allows riders to cross smoothly through the gap. Some people have been known to ride it without cheating. 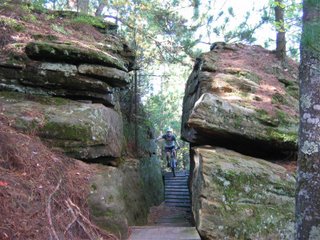 The Cliffhanger is a short trail that circles the top of the mound. It is wide enough to ride a bike around the cliff-face trail, but not much more. The trail has lots of rocks and roots to throw you off and make you think about falling down the cliffs. I walked through the parts that made me nervous, but I bet braver folks ride the entire thing. I was glad when I completed the Cliffhanger. It made my feet sweat, but I'll do it again.

All the trails felt easier after the Cliffhanger because it was so difficult for my mediocre skills.

I also really like the Snodgrass trail. The topo map shows that it winds through lowlands and I didn't expect much from it, but it was fast and fun with lots of wetland vegetation growing around -- a nice change from the deep woods and hills of the other trails.

Levis/Trow Mounds is a great trail system within a 2 1/2 hour drive from the Twin Cities. This makes it closer than the CAMBA trails and a nice alternative for a day trip.
Posted by rigtenzin at 9:48 AM

Please, call me Jackrabbit Slim. Redthoughts would be where to find me..after I post something tonight/ tomorrow.

Wow - what a way to spend time on the bike. I, of course, am too much of a weenie and will thus stick to the roads and live vicariously thru folks like you.