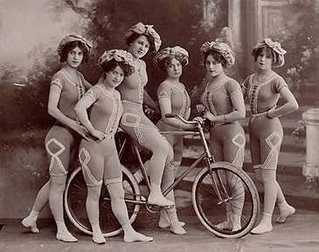 Here's a video of an artistic cyclist in action on Google video.

I watched the video a couple of months ago and was very impressed. I noticed the woman in the video wore what looks like track-bicycling clothing. I assumed she was a track rider. Then I noticed the front end of the bike was really short. This indicated it was built for this purpose.

I didn't make the connection that this must be another niche in cycling. And now I know it's not a new niche either. I've also seen a video of a guy doing similar riding from 1899.

My neighbor bought a fixed gear bike this year and he spent lots of time in the alley trying to ride backwards and in tight circles. I'll have to talk to him about this. Maybe he's working on his artistic cycling skills.

I'm sorry for all the links in this post, but I don't want to merely repeat what already exists in Wikipedia. By the way, I added the link in the Wikipedia page to the 1899 video. That makes me an contributor - yeah!
Posted by rigtenzin at 9:41 AM

Aha! This is what I've been looking for. Expect some changes at this Saturday's ride.

Such pornography!!!! Shame on you for posting that terribly lewd photo on your blog!

That was unreal. after watching the woman in the gym for a while, I wouldn't have been at all surprised to see her sprout buck teeth and tunnel her way through the floor.

Jim: I hope your changes include you in one of those little outfits.

eclect: Their outfits are pretty similar to today's racer kit, except today's helmets are not nearly as stylish as the headgear those ladies are wearing.

Tim: What a coincidence! I say the same thing about you each day at work.

I was only kidding!!

Although, those clingy, leg-displaying numbers must have been quite racy in the day.