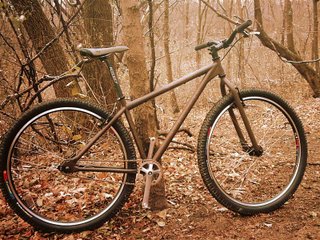 Riding a single-speed bike or a rigid bike on off-road trails is a more vigorous activity than the alternatives. I reminded myself of this today while taking a lunch-time ride on the Minnesota River bottoms trail with my new Redline Monocog 29er.

I stood up on each rise and hill. I had to use some finesse to get over roots and rocks. My arms and back are more tired than I'm used to after riding this trail. I really enjoyed the ride. The woods are in beautiful shape right now. I recommend everyone get out there and ride or hike or run.

I took a few photos with the mildly CreepyCam. It takes better photos than the original CreepyCam. I added some effects, because I've always wanted to play with that stuff.

I passed a pair of hikers and a dog on the way out and also on the way back. The dog was running so fast I figured it had a rocket pack. It looked like a German Shorthair, but it was white. On our second meeting, the dog was going the opposite way on a parallel trail to mine. She crossed through the woods behind me and ended up on the same trail as me. She changed directions and started to pass me from behind when she hit a pretty large branch sticking out into the trail. She did a complete flip in the air and landed right next to me. I had slowed down to a crawl as soon as I knew she was behind me. As she flipped next to me in the air, I saw her pink belly. She landed, rolled to her feet and bolted, but immediately pulled up limping. The owners were on the scene by then. They said she'd be OK, but I don't know. That four-legged wonder might be limping for a while. Athletic dogs like her are amazing.

I should have taken her picture. Her nose was half pink and half brown. 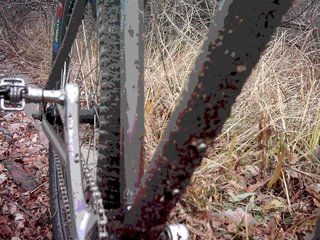 The sepia color looks great with the bike and the autumn scenery. I like how the tires and rims still have the colorful logos too.

You took the chainguard off?!