The Fine Taste of Exhaust 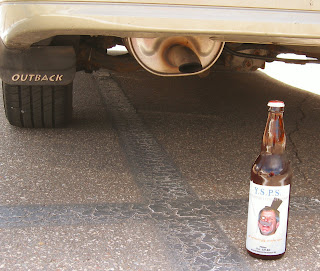 My new route allows me plenty of chances to belly up to the smoke and fume bar. After a couple of weeks inhaling auto exhaust, I've developed a taste for it. I've grown fond of the taste of exhaust from old Camaros that need a ring jobs. And the taste of ethanol fumes is delicious. I look forward to a world where most cars are fueled by E85.

A rare treat is being stopped behind a diesel Golf running on waste vegetable oil. I think I'll carry two water bottles from now on. One will contain white wine and the other red. Then I'll have the perfect accompaniment for any flavor of exhaust. White goes with standard gas exhaust (better with a touch of burning oil) and red goes nicely with ethanol blends.

What goes with waste vegetable oil you ask? Beer, of course. That's where the big, dorky Carradice-style bags come in handy. I can easily haul a 4-pack of Guiness along for the ride. I think I should look into a handlebar bag though. That'll allow a quick-draw style of drinking while in traffic.

I think I'm developing the ability to tell how many miles are on a car based on the taste of the exhaust. Mmmmm.
Posted by rigtenzin at 10:47 AM

You need one of these babies. You can get sloshed without leaving your aero tuck position.

I, for one, have stopped waiting behind cars at the lights for the very reasons sparking your little tome - "auto" asphyxiation.

Some more flavors for your pallate: Diesel engines will run on straight canola oil, or a related fuel, rapeseed methyl ester. The very first diesel engines ran on coal dust -- and don't forget bio-gas. Yum. Ever notice that cars smell worse in winter?

Don't be offended by "dorky." I own a couple Carradice bags and really like them.

Love the wine in bottles idea.

Would simply carrying a Rose do the trick?

Don't forget to bring some water crackers to cleanse your palette between stoplights.

I hate the headaches I get when scarfing down the red wine behind an intoxicatingly slow Volvo.