The other day, while stopped at a traffic light on my bicycle, a guy pulled up next to me, pretty close, in a car and said, "Hey, you're not a car."

"I know," I answered in a matter-of-fact way.

Because he pulled up so close and I've heard the same comment from others in the past, I expected trouble. I turned to look at him and he said something else, although I couldn't understand it. So I asked him to repeat it. Asking a guy who just confronted you to repeat something is a sure way to escalate an already tense situation, but I truly did not understand him.

Most guys know about this. It's like when Joe Pesci plays a mobster and asks, "What are you lookin' at?" 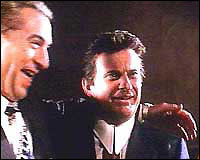 But he didn't escalate. He asked me if I was one of those bikers who flip people the bird. I told him that I used to, but I stopped that a few years ago. I added that I don't think anything good comes from that. He smiled and nodded. His girlfriend laughed a little and they drove off as the light turned green.

I rode off too and thought about the little conversation for a long time. It's stuck with me although it really had no substance. Maybe it was that I expected something regrettable to happen and it did not. Was he ready to make trouble? Or was he just one of those guys who talks to everybody?

I don't know the answer, but the exhaust from his lowered '80s Maxima was dreadful.
Posted by rigtenzin at 7:43 AM

I found myself reading this and embellishing, imagining the guy had Clint Eastwood's ominous Dirty Harry voice and semi squint.

He also had one arm draped casually over his girl's shoulders, and as she laughed, the car gave a sporty roar and it pulled away.

I've seen WAY too many movies.

Sounds like you properly defused him. Although I picture you with the Clint Eastwood voice, "You're gonna look awfully funny with that gear shifter sticking up your a**...".

It's the pale ale typin

Like Jeff, I was imagining you ala Eastwood but saying, "how are you going to pick up your teeth with two broken hands"?

But then again, maybe he was just being friendly....could happen.

I had a similar experience a month or so back after a woman totally cut me off coming around a corner while i was biking to work. At the next light, she was in the left lane a couple of cars back, and i just rolled to the front, trying not to be all confrontational about it (hard to resist, because usually they're long gone after the fact). The second light after that, we were both at the front of the line, and she sincerely apologized, saying she hadn't seen me (wearing a yellow jacket, blinkies, etc.). It was surprising and made me feel like there's some hope, after dealing with so many intently indifferent drivers on other days.