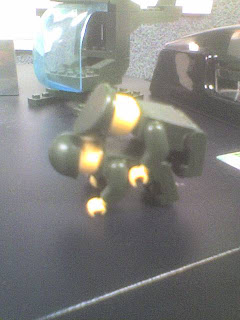 Someone in my office is a real sicko. This miscreant arranged my little fake lego guys* in a way that makes them look like they're "wrestling." I describe it as wrestling, because there's a chance young, innocent eyes are reading my blog. I doubt those same eyes see the comments though.

This pose was struck a few months ago and I took a photo of it with my crappy cell phone camera back then. I just downloaded it today and thought some of you might find the sight of fake lego guys wrestling to be funny. I thought it was very funny, but my boss didn't. He fixed it right away. He's got a great sense of humor, but he doesn't want anyone to be offended around here. You never know how the other folks will view such wrestling poses.

* These are not real Lego guys. They are the knock-off brand Mega Blocks. While writing this entry, I couldn't remember the name of the fake ones so I googled for them. I found this link about fake legos. The fact that I found this entry while conducting a random search is pretty frickin' remarkable, because the guy who writes Primate Brow Flash is a prime suspect in the case of "Who posed the fake lego guys." Actually, I'm just about positive he's the one who did it.
Posted by rigtenzin at 8:45 AM

did you ever scope out the brick testament? funny...

check out the section on "the law"

This is exactly why I purged my lego collection of megablocks. I never actually caught them in the act like you did, but whenever I'd open a "mixed" container, all the figures had these knowing grins.

These are the pilots of the helicopter in the background.

The Brick Testament is great. When I want to laugh, I read the bible.

by the way, your site is now #4 result for a search on "knock-off brand legos"

That you 1) even commented on the guys not being real Legos, and 2) made the effort to find out the maker of the knockoff Lego guys cracks me up, big-time.

I can mock you for this, only because it's so something I would do, too.