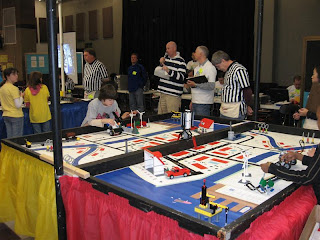 My son participates in Lego League. It's a tournament consisting of several events: performance, presentation, technical judging, and head-to-head lego bouts with other teams.

The performance events consist of the team running their lego robot through known missions while being timed. The missions are run on a table about the size of a ping pong table. Within 2 and half minutes, they try to complete as many missions on the table as possible. Each mission is worth some points. The point values vary with the mission. Some are more difficult than others. 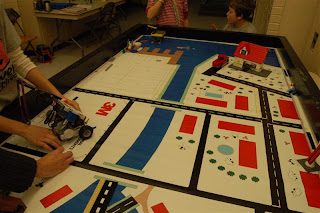 The kids design and build the robots themselves to accomplish the missions. It's interesting to see the wildly varying styles the kids come up with. 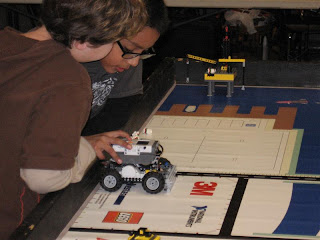 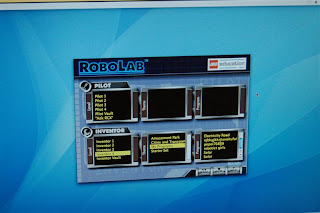 Another part of the competition is the technical judging event in which they have to explain how they designed the robot and how they worked together as a team. I have the feeling the judges are watching this closely to get a feel for how much involvement the adults had. The judges ask lots of questions. This makes some of the kids pretty nervous.

Each year the tournament has a theme. This year it was alternative energy sources. Each team researches the theme, picks a specific topic within the theme, and gives a group presentation that is judged (scored). It's about 15 minutes long. Lots of nerves here too. 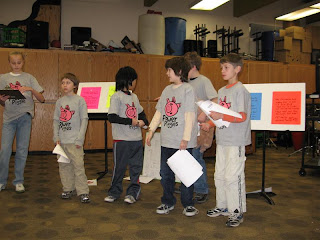 They also have head-to-head duels which are single-elimination matches. 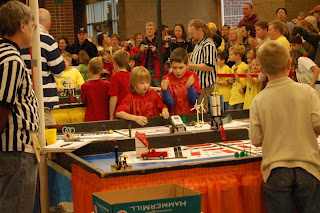 The team completing the most missions in each duel advances to the next round. This is the most exciting part of the day. Here's a photo of the brackets shown on the overhead projector. 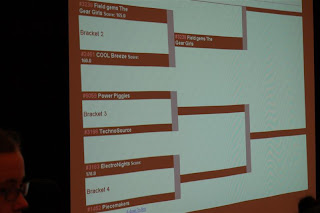 I recorded a 2 1/2 minute video showing a head-to-head match from start to end. The AVI file was 100 MB and it took about 30 minutes to upload. I don't know if it will appear here or not. After waiting 2 days to post this entry, the blogger editor still says "Uploading video ..."

If it appears, I'll repost a link to it, just in case anyone wants to see the video. And if someone has suggestions to improve my video posting abilities, let me know.

Posted by rigtenzin at 2:11 PM

So very very cool! How old are the kids?

That does sound like fun. Do they have adult leagues?

As for the video, did you try posting it to youtube and then embedding it from there?

The youngest is 4th grade and I've heard it goes through high-school age. I've never heard of adult leagues, but I bet someone's doing it.

I used to upload to Youtube, then link from blogger, but blogger now includes the video link and that has worked on other occasions for me, although they were much shorter clips.

These kids were 4th, 5th, and 6th grade. Next step is a state tournament, but not for my guys, they didn't make it.

I'd love to have an adult Lego league. Sure, I could buy a Mindstorms set and play on my own, but having a series of goals in mind while building would make it much more worthwhile.

It really is true there is something out there for everyone. There are so many organizations, activities, etc., that one has no idea even exist.