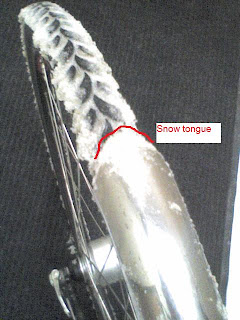 Posted by rigtenzin at 7:27 AM

In the interest of science, you should flip the tire to see if it makes any difference to have the tread going the other way.

You should come up with a term for the snow that comes shooting out of the fender when traveling at a high velocity through the snow on the streets. The "snow-thrower" effect.

Snowtongue? Weren't they a Danish death metal band from the 90s?