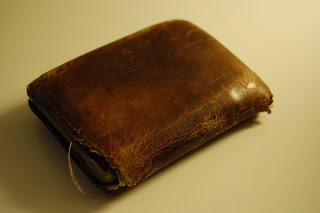 I crashed my newly built bike. I was riding through a park several blocks from my house to get the mud off the tires (wet grass does a good job of that). I cut across a sidewalk at an angle and crashed on the edge of the pavement. I got up, a bit shaken, and rode home standing up, because the seat broke off the rails.

A couple hours later, my wife came in the house after running. She asked where I crashed. I told her the name of the park in which I crashed earlier. She handed me my wallet. It had popped out of my jersey pocket during the crash. She happened to run through the park and find my wallet sitting in the rain-soaked grass about four feet from the sidewalk.
Posted by rigtenzin at 6:08 PM

Wow, how lucky! Not crashing would have been even luckier, but we take what we can get.

Women have that homing signal to their hubbies wallet in case there's money instinct.

P.S.S. I do not possess said homing signal/hubby's wallet thingie.

WOW...what are the chances?

you're a lucky man on both accounts...umm not the crashing thing though. How's the bike?