I've been using a battery powered headlight for the last couple weeks on my ride to work. It's a NiteRider MiNewt Mini-USB Plus LED. The literature says it weighs 6 ounces. I haven't weighed it myself, but it is really light compared to my lead-acid battery light of days gone by. Last year, I used a Shimano generator hub to power my LED light. It was very nice and not worrying about recharging batteries was nice.

The NiteRider is much brighter and I can easily move it from bike to bike. I have a few bikes that I like to ride to work (one at a time of course). The generator light limited me to one bike.

I first used the NiteRider light in a offroad race in which I had to ride at night. It worked really well there and I figured that since I spent money on it, I might as well try it on the streets too. 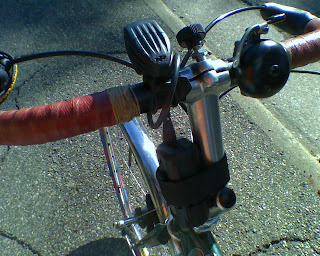 This is a photo of it on my bike. The headlight is about the size of an egg and the battery is about the same size as 3/4 a stick of butter. It's the black thing attached to the handlebar stem in the photo below. It holds a charge for about three hours. Not too bad.
Posted by rigtenzin at 2:59 PM