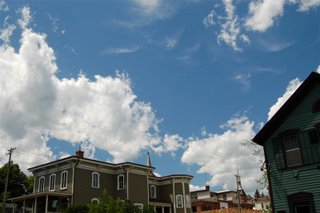 I didn't make it to the Friday night criterium due to weather. The rain came hard and heavy. I called my friend whom I intended to meet there. He was stuck in Brainerd at the airport waiting for the weather to pass.

I stayed home with my family, probably where I belong anyway.

Sunday, we watched the last stage of the Nature Valley Gran Prix. I really didn't ever notice how hilly Stillwater, MN is, but now I know.

It was fun to watch the race. I got a few photos. We found the park I'd read about in a newspaper article. It's called Teddy Bear Park. My son said it is the best park he's ever been to.

In the grandstand area of the race, we watched a trials/stunt rider named Aaron Lutze. His performance was amazing. I'll try to post a photo of him riding off of something big. I noticed that after all his performances he came around and talked to the kids. That was most impressive. He seemed like a really nice guy who realized the kids were watching and cared enough to talk to them.
Posted by rigtenzin at 7:23 AM

Teddy Bear park sounds great! I'm going to take my nieces there. I probably won't get them out of the park until way after dark!