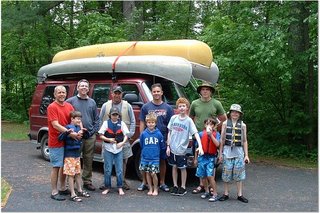 I went camping and canoeing this past weekend. My son and I joined 5 other dads and sons for camping at Chengwatana State Forest (east of the Pine City exit on I-35 North of the Twin Cities). We had a great time. I'm a poor canoe-er, or is it canoe-ist, anyway, I'm terrible. In the Snake River, we felt the scrape of rocks on the bottom of our boats. We bashed the canoe into lots of them. The water was lower than when we traveled the same path last year.

My son thought we were going to die. He said it several times. I never felt that scared, but my fear was aroused. The Snake River dumps into the St. Croix. That was a much smoother stretch of river.

At the campsite, the kids went wild. They ran through the woods like wild animals. We fed them and the ran. They also played in the fire. We had two rules: no forest fires and no drownings. They managed to follow them all.

I took a roll of film using the water-resistant camera. I'll get them on a CD and post one, maybe.

Here's a link to photos taken by another dad, Tim:
http://share.shutterfly.com/action/welcome?sid=8ActHLRwzcNWGD&notag=1

It was six dads and six 9-year olds. Awesome fun.
Posted by rigtenzin at 10:06 PM

Did you throw the kids' food on the ground or let them eat it out of your hands?