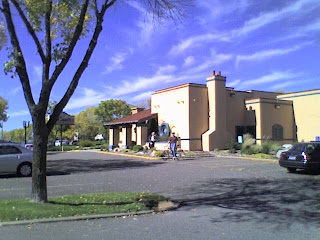 A coworker (shown on his bike in the photo) and I rode to lunch today in Roseville where we work. We ate at a Davani's restaurant and discovered an old, Spanish adobe building next door. I had no idea Spanish settlements stretched as far northward as Minnesota.

I did a little research. Here's what I found.

The Spanish moved northward into Iowa and Minnesota in search of a permanent ice supply in the early 1770s. During the summer of 1771 the Spanish government sent a muletrain of 40 soldiers and a priest northward. They crossed the Mississippi River during late October. Winter was approaching so they set up a camp a couple of miles north of the river. They liked the flat ground that allowed them to see all directions. Sadly, their leader, Luis Portola Ortega died of a painful leg infection. 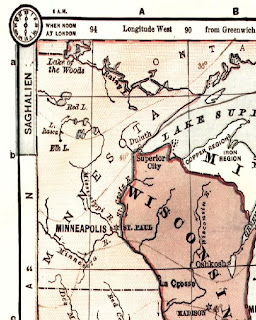 The winter of 1771 was mild allowing them to recuperate from the difficult journey north. Despite the setback of loosing their leader, the explorers flourished. They built wooden cabins using the abundant forests. They trapped beaver for clothing and hunted the plentiful deer population. Spring found them in better condition than in the preceding fall. They decided to turn their encampment into an outpost and named it Santa Muchos Lagos. They rebuilt the wooden buildings using their familiar technique of adobe construction. They also had time to build a little church. The building shown in the photo is believed to be the church, it's not for certain though.

Word of the comfortable settlement traveled back with the ice shipments to the large Spanish towns in the southwest. Settlers began to arrive and it's estimated the population may have reached 200.

The harsh winter of 1773, even by Minnesota standards, caught the newcomers by surprise. They didn't have the experience or proper equipment to withstand the cold. Evidence indicates the settlement was struck by an outbreak of food poisoning. Most of the Spanish explorers and settlers died during the long, snowy winter. The few who lived until spring, headed back south to more comfortable climates as soon as the snow melted. Their trek was slowed by thawing mud. They were forced to leave several other outposts along the way.

This building is the last piece of the Santa Muchos Lagos settlement. If you listen with your heart, you can still hear the voices of the intrepid, Spanish explorers skinning beavers and tending to their mules. 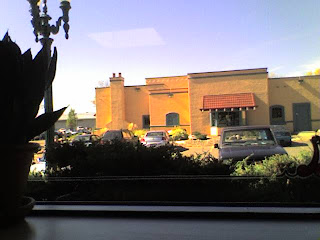 Posted by rigtenzin at 2:22 PM

I thought you were joking when you were talking about it, but now, with the map and the links, it turns out to be true! One thing I don't understand is how they got the adobe all the way up here.

What a fantastic find!!!

(and I intially thought you were joking, too. Ha.)

A nice start but the Kensington Runestone story is way better.

dang, I'm appreciative of said entry, happening to be a Spanish teach in dear ol' KY. Understand, and your readers too, that many of those southerners crossing said border/Rio Bravo are now referring to their migration as the Reconquista. That'll put the fear of God in your average Good Ol' 'Murcan. Thanks for the entry.

Is it true that one of the settlers gassed himself to death while sleeping in an under-ventilated room after indulging in a few too many Grande Bean Chalupas?

Jim: I think you read the same history book that I did.