Don't Ride on the Sidewalk 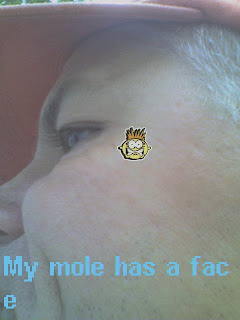 I have a funny story, at least I think it's funny.

Last night I was admiring the extensive sidewalk replacement happening in a neighborhood along my route home. Workers had dug up the broken sidewalk sections and were building the forms to pour the new concrete. Every house had lots of torn up sections. No one escaped the forced sidewalk replacement. I’ve been through it myself and it’s a lesson in local government. Homeowners own their sidewalks, but the city controls them. The city will force you to replace the sidewalk when it has defects like cracks and bulges. I’m not complaining – just explaining.

I was riding pretty slowly admiring all the hard work that goes into a project this large. Another cyclist flys by me without a word. He rode in a manner that I can only describe as “better than you.” I don’t know what told me that, but it was my impression. He wore a backpack, headphones, and rode a cyclocross bike. I saw the knobbies and cantilever brakes. He cut past me and headed for the section of downhill sidewalk ahead of us. I assume he planned to use the sidewalk to align himself with the bike trail entrance just ahead at the end of the block.

He noticed a little too late that the sidewalk he was heading for, was missing. He locked up the brakes and skidded sideways. He brought down his speed pretty well, but not quite enough. He piled up on his front wheel and stopped short of an full endo, instead doing a low-speed sideways flop onto the road.

As he clattered to the ground, I said, “Oops” as I passed by. His crash was at a slow enough speed that I knew he didn’t need any help from me. I had some advice for him, but he didn’t need that either.

The photo? That's irrelevant. I found it on my phone after my son had been playing with it. My mole is not nearly that big.
Posted by rigtenzin at 2:29 PM

thats pretty funny, im always the one getting left behind by the spandex wearing riders...

though one day one actually slowed done said hello to me and then rode off...

Oops. Nice. he he

AND you've been tagged.

What? You didn't yell "Ha ha!" in the voice of Nelson Muntz? I would have as I rode away on my bike with the banana seat and handlebar streamers.