I completed the conversion of my commuting bike to a 3 speed mentioned in a previous blog post. The work went pretty smoothly. I built a wheel, installed the shifting parts and chain, and replaced the rear brake pads and brake cable.

The bike runs nicely again. The new chain is vey quiet. Of course, it's difficult to hear drive train problems over the sound of the studs whirring on the pavement. The other day, I had a U of M student caught in my chain. I didn't notice until I stopped at a traffic light and heard his iPod. 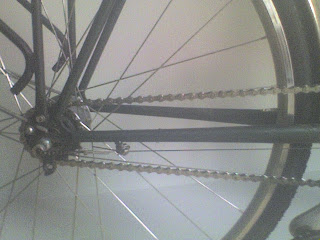 I think it's noteworthy that I didn't use the 3-speed shifter. Instead, I used the Sun Tour friction bar-end shifter that was already installed. It works fine. I was worried that it wouldn't control the cable well enough to prevent me from finding the slipping spot near the middle gear. I haven't had the problem yet. I know two very experience riders who are using the same setup and they say it works great (Mellow Velo and Boones Farm).

I still want to build a more heavy-duty wheel for this bike. Mellow Velo has a 40 hole hub he's going to sell me. I'll pick that up this week sometime. The wheel I just installed has 28 holes and I intended it for another project I have in mind.

Now, the 3-Speed Blog is more three-speedy than before.
Posted by rigtenzin at 8:10 AM

I'm planning something similar with the hub I got from MV. I feel like a junior high school student following the trend!

By the way, the redesign of your blog looks really nice.

Nice bike there. I've been commuting with 3 or 4 speed sealed hubs for 10 years now. Very dependable. I have forgotten why I might ever want to go back to a freewheel.

Congratulations! and welcome to the 'Tin Can Bar End' club. I see my membership campaign has paid off. In my experience the set up works very well with the Sun race manufactured AW wheel that I use 90% of the time. I love the setup with the bar end shifter because the shifts are easy & precise and the hub has never popped out of gear on it's own. The other 'Tin Can' wheel that I have for this machine is built around an early 50's Sturmey AM hub. I love this hub because it's faster than the sunrace AW based wheel which is probably due to the fact that it was designed for club riding & time trialing.However sometimes with the setup, the middle gear will pop out of gear by itself which isn't good when I'm trying to keep up with speedy riders like rigtenzin & velocipete.

I just use an Orion shifter. It works pretty well.