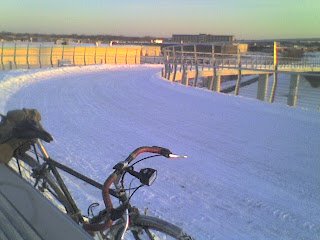 I usually think winter rides are less noteworthy than the warm weather rides. I'm not sure why, because last night's ride home was a doozy.

The snow layer covering the streets and trails had disappeared in many spots, exposing the ice below. The studded tires allowed me to ride over the ice with no worries. It's only when I stopped and put my foot down that I realized how slick it was.

The trails that still had snow cover over the ice were the worst yesterday. The snow had softened into the consistency of mashed potatoes (thanks to Yam for this description). It was especially thick on the Midtown Greenway trail. I got off of it as quickly as I could, because the riding was so difficult.

After I got off the Greenway onto a side street, I discovered something that will probably be of no use to any of you, but I'll tell you anyway. Coroplast signs are very slippery when they are on top of ice.

I discovered this first hand. My attention was on the cars around me at one intersection and I ran over a "We'll buy your house" sign laying in the road. As soon as my tire ran over it, the sign slid out from underneath and I went down in a flash. My winter layers padded the fall. I got up and tried to throw the sign off the road with the angry fury of a badger and the ineptness of a toddler. I was wearing mittens so I didn't get a good grip on the sign. The sign still had the wire legs attached that caused it to be a little unwieldy. The wind caught it and it looped up in the air and landed about a foot in front of me. I thought of kicking it, but I figured I'd land on my butt again because of the icy street. I picked it up and gave it an underhand fling into a snow bank.

I'm sure the auto drivers were entertained by the bicycle crashing, sign throwing idiot.

The side streets were ugly because of the combination of taters and ice. I chose a main street and found the riding much better. Although some of the auto drivers treated like a traffic cone.

Before the sign incident, I took a few photos from on top of the Midtown Greenway/Hiawatha bridge with the creepy cam. The sun was low and I liked what I saw. 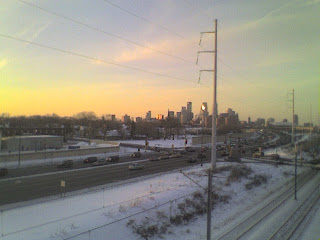 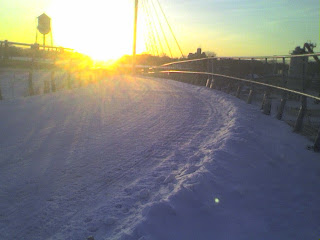 Posted by rigtenzin at 7:47 AM

I find the snow a good workout, but hard to get anywhere in decent time. Between the low gearing on the Icebike and snow, the going is really slow. I'm lucky it's only a five mile commute.

It's why I'm hesitant to join y'all on the HC rides on Saturdays. I'd hate to hold back the crowd with my wild spinning and top speed of 10 mph...

thanks for the warning about the signs.

I was riding that bridge last night with my daughter on her tag-a-long...

Glad you weren't hurt. Does this change your position on coroplastic fenders?

Don't feel bad. I fell today while I was walking my bike. I was trying to cross that snow drift on the east side of the Hiawatha/50th Street intersection to get to the parkway. No coroplast was required.

A workout? Yes. I feel like a wrung out rag at the end of my snow commutes.

I still like coroplast. I just picked up a Colleen Rowley sign and a Rebecca Otto sign from Hiawatha. I'm planning to make a front box to hold stuff.