I Crashed on the Ice 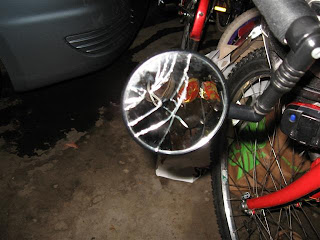 I rode my studded-tire equipped bike home yesterday with a great deal of self satisfaction. It was a difficult ride due to the snow and ice patches. It felt a bit like riding off road. But I was managing, and quite well.

As my smuggness set in deeply, about two blocks from reaching home base, my front tire slid out without warning. It felt just like riding on ice without studded tires. My wrist hurt a bit. I picked up my bike and rode home.

The wrist pain has increased enough that I'll stay off the bike a few days until it improves.

The biggest injury is to my belief that bicycling is a superior way to travel. I can barely admit that I hurt myself riding on the ice that I so proudly told anyone who asked, "Ice is no problem. I have studded tires."

I imagine some people thinking, "What do you expect? You can't ride a bicycle on ice, dumbass!"

I'd like to blame my the tires for not being good enough. Maybe I should buy some Nokians. A friend pointed out to me that the studs on my tires are not all above the surface of the rubber. The studs are set at uneven depths.

Until the crash, I was taking icy corners with impunity. I was in charge. I ruled the roads. Now, I'm not so sure of myself.
Posted by rigtenzin at 6:03 PM

i've been told that Nokians are the way to go.

I crashed pretty hard on Christmas Eve riding my non-studded Schwalbe fatties inflated to super low pressure. I almost went down today on the same tires. In two years of commuting on Nokians, I didn't have any falls that were attributable to losing traction. I think it might finally be time to put the nokians back on.

Hope your wrist heals up.

Blame the tires, by all means. You put me to shame. I need to haul out my bike today and ride on my non-iced streets.

Hope your wrist heals quickly. I fell a few weeks ago on some ice before I put the studs on and am still recovering a bit from it -- must be old age.

Having ridden the Kendas and Innovas prior to the Nokkians, I would give the Nokkians a slight edge. But hell, you're still balancing on ice so nothing is foolproof.